Line will be up by end-2026; PM Lee hails pact as a significant milestone in bilateral ties

Singapore and Malaysia yesterday signed a historic agreement to construct a high-speed rail line that is slated to start by Dec 31, 2026.

The line between Singapore and Kuala Lumpur will be 350km long and have eight stations. It will go across the Strait of Johor via a 25m- high bridge near the Second Link.

The landmark deal will transform the way both countries interact and do business, Prime Minister Lee Hsien Loong and his counterpart Najib Razak said yesterday at a media press conference after their annual Leaders' Retreat.

They called it a "marquee project" in a joint statement, saying it will bring their countries even closer together, improve connectivity, deepen people-to-people ties and catalyse further economic cooperation.

PM Lee hailed the agreement as a significant milestone in the relationship between the two countries. "It gives both sides a big stake in keeping relations stable and warm."

The ambitious rail link conceived in 2013 will cut travel time between Singapore and Kuala Lumpur to 90 minutes, compared with more than four hours by car.

The legally binding deal was signed by Singapore's Coordinating Minister for Infrastructure and Minister for Transport Khaw Boon Wan, and Malaysia's Minister in the Prime Minister's Department Abdul Rahman Dahlan.

It formalises technical, safety and security requirements as well as regulatory and commercial frameworks, among other things.

The signing also marks the shift from a planning phase to that of implementation, and comes after both sides inked a memorandum of understanding for the project in July.

Mr Lee said there is "strong political will on both sides" to ensure the project is done right and is a success. He quipped: "I look forward to taking my first train ride up to Putrajaya in 10 years' time." 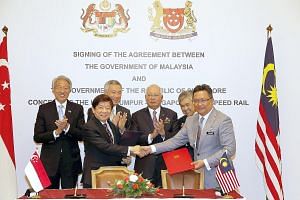 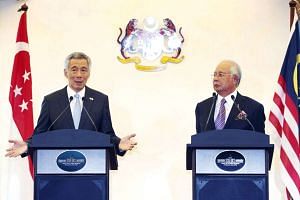 While the 10-year timeframe is a "relatively short period of time" given the size and complexity of the project, Datuk Seri Najib said he is committed to meeting the deadline.

"We have to work very closely together and be very focused, and we must overcome all the challenges as we move ahead," he said.

Both countries will award a joint tender for a development partner early next year, to provide operational and technical advice as well as procurement advice on high- speed railway systems.

Mr Najib said an international tender will be called in the fourth quarter of next year for an assets company to design, build, finance and maintain rail assets and trains for the line.

A bilateral committee, led by senior government officials from both sides, will oversee the arrangements set out in the agreement.

Yesterday, both leaders reaffirmed their commitment to further strengthen relations, amid a challenging global security and economic environment.

They agreed on technical details for the Rapid Transit System link, which will connect the Thomson- East Coast MRT Line (TEL) to Johor Baru via another high bridge near the Causeway. The link will use the same rail systems and trains as TEL.

Both sides will also hold a cultural showcase every three years alongside future retreats, starting in 2018.

"This will further our cultural cooperation, which is very important because our relationship must be more than just economic and transactional," said Mr Lee. "Ultimately, it is about friendship, friendship between the people, friendship and trust between the leaders. And arts and culture play an important role."

Other issues they discussed include trade, tourism, water and transboundary haze pollution.

On water, the leaders agreed on the importance of taking the necessary measures to ensure reliable and adequate water supply from the Johor River as stipulated in the 1962 Water Agreement.

In a Facebook post yesterday evening, Foreign Minister Vivian Balakrishnan said: "Our relationship with Malaysia is strong and flourishing. We are bound by history, kinship, culture and strong people-to-people ties."

Reports on the HSR and other issues discussed.