Malaysia has hailed the high-speed rail (HSR) agreement with Singapore as a "game changer" not just for its own economy, but also for relations between the two neighbours.

Calling the deal signed yesterday "momentous", Prime Minister Najib Razak said it would change "the way we conduct business, the way we move people and the lifestyle between our two countries".

"This project will open a new landscape in terms of our bilateral relations," he told a joint press conference with his Singaporean counterpart Lee Hsien Loong.

On Sunday, Minister in the Prime Minister's Department Abdul Rahman Dahlan, who heads Malaysia's team on the 350km project, said the government was committed to pursuing its completion in 2026.

He added that the HSR was projected to contribute RM100 billion (S$32 billion) to Malaysia's gross domestic product (GDP) through construction, operations, ancillary services and indirect multiplier benefits such as tourism and appreciation of property. "Through holistic planning, the wider economic benefits that could be leveraged from the HSR project are conservatively estimated at an additional RM21 billion of GDP in the year 2060, with 111,000 jobs created based on a World Bank study," Datuk Abdul Rahman, who is also the Economic Planning Minister, said in a statement.

Datuk Seri Najib said "10 years is a relatively short period" considering the project's size and complexity, and urged both governments to work closely with each other to meet the deadline and ensure the budget is not exceeded.

Although no fixed cost has been officially set, Second Finance Minister Johari Abdul Ghani said in July that he expected the figure to reach about RM50 billion.

Though some analysts were concerned about the short-term impact on government finances and the balance of trade due to imported assets, they agreed with the Najib administration that the HSR would boost the economy in the long run. 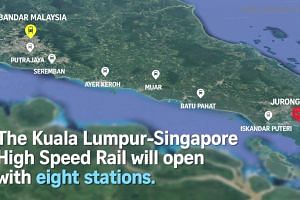 However, Mr Najib told reporters "we do not envisage problems in getting long-term financing" as "we believe that this HSR project is commercially viable".

While the two governments will finance the civil infrastructure and operate the stations, they are expected to appoint a privately financed company to deliver the trains and track system, and which will then lease them to private operators.

"I know people are excited about it. The towns along the way will definitely see a marked improvement in terms of economic activities," Mr Najib said.

Among the businesses looking forward to the rail link is Majupadu Development, a Kluang-based real estate outfit that sees the nearby Batu Pahat station as a boon for the town's property valuations.

"We plan to attract future businesses for Kluang, including new investments as a result of the HSR. This could very well be the new spine of our community that will facilitate urban developments for generations to come," Majupadu executive director Tey Fui Kien told The Straits Times.

10 things to know about HSR