SINGAPORE - The ChildAid 2018 concert opened on Sunday night (Nov 25) with three upbeat numbers including Abba's Dancing Queen from the 1970s, with performers paying tribute to the evolution of pop music from the 1960s.

Jointly organised by The Straits Times and The Business Times, the concert raises money for two different funds for children.

They are The Straits Times School Pocket Money Fund, which provides pocket money to schoolchildren from low-income families, and The Business Times Budding Artists Fund, which helps fund arts training for underprivileged children and youth.

This year's theme is "Jumpin' Jukebox Jive" and the 143 performers, whose ages range from five to 19, took to the stage to sing, dance and play instruments to hits like Fun Fun Fun by The Beach Boys from the 1960s and a mash-up of Lady Gaga's Bad Romance and Poker Face from the 2000s. 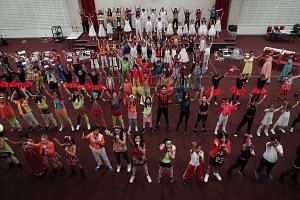 All fired up for ChildAid 2018

Performer Sofea Darwisyah Iskandar, 11, and 36 other children sang and danced to a mash-up of Christina Aguilera's song Beautiful and James Blunt's You're Beautiful.

"This concert is also a way to boost my confidence and make new friends," said the Primary 5 pupil from Bukit View Primary School.