More new flats were sold and more existing flats underwent upgrading, contributing partly to a 44.4 per cent spike in the Housing Board's (HDB) net deficit in the last financial year.

The report also showed an increase in the deficit for HDB's home ownership programme, from $861 million previously to $1.383 billion in the last financial year.

The figure comprises mainly the gross loss on the sale of flats, disbursement of Central Provident Fund (CPF) housing grants and the expected loss for flats that are currently under development.

Expenditure for CPF housing grants also rose, as the grant quantum was increased in February last year from $30,000 to $50,000 for first-timer families buying a four-room or smaller resale flat, said HDB.

On the upgrading front, the agency saw an increased deficit of $639 million, compared with $482 million the previous financial year. 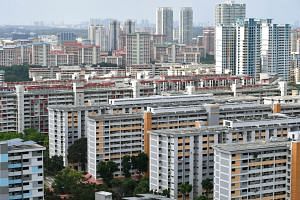 HDB resale prices back to slow slide with 0.2% dip in Q3; 3,800 BTO flats to be released in November

This was due to more flats undergoing upgrading, under the Home Improvement Programme, Neighbourhood Renewal Programme and Lift Upgrading Programme for housing estates.

Meanwhile, residential ancillary functions - including lease administration, provision and management of facilities such as carparks, and planning and building administration - saw a dip in deficit to $338 million, from $428 million previously.

As with every year, HDB will receive a grant from the Ministry of Finance to make up for the deficit.

For instance, a new HDB resale portal, which was launched in January and has halved transaction time from 16 to eight weeks, received 3,843 applications as of March 31.

Also, as of March 31, 62 families have been placed on the Fresh Start Housing Scheme, which aims to help families with at least one child below the age of 16 who live in public rental flats to buy a two-room flexi flat.

New building initiatives and technologies adopted over the past years helped the HDB achieve an overall construction productivity level of 14.8 per cent last year, exceeding its target of 14.5 per cent.

It cited factors such as prefabrication technology, standardisation of design and detailing, as well as the use of new materials and construction technology.

With the adoption of these initiatives in more building projects, HDB said it is on track to achieve its target of 25 per cent productivity improvement by 2020.

A version of this article appeared in the print edition of The Straits Times on October 23, 2018, with the headline 'HDB's annual deficit grows by 44 per cent to $1.7b'. Subscribe
Topics:
More
Whatsapp Linkedin FB Messenger Telegram Reddit WeChat Pinterest Print Purchase Article Copy permalink