SINGAPORE - Older rental flats will be eligible for Home Improvement Programme II (HIP II), a second round of upgrading for Housing Board flats that are around 60 to 70 years old.

Minister for National Development Lawrence Wong assured Mr Saktiandi Supaat (Bishan-Toa Payoh GRC) in Parliament on Monday (Oct 1) that these blocks would benefit from the programme, just as many of them are eligible for the ongoing HIP I.

HIP II will be launched in about 10 years' time.

HIP II, as with the other redevelopment plan announced by Prime Minister Lee Hsien Loong in August - the Voluntary Early Redevelopment Scheme (Vers) - remained of interest to MPs, despite the Government's stand at last month's Parliament sitting that time is needed to work out many details.

In total, four MPs asked questions about the programmes, including Workers' Party chief Pritam Singh (Aljunied GRC), who suggested some technologies the HDB could look into to slow down the deterioration of ageing buildings.

Mr Wong added that the authorities will ensure there is no wastage of public funds in planning both HIP II and Vers, which lets HDB dwellers vote to go en bloc and sell their ageing flats to the Government.

He was responding to Mr Chong Kee Hiong (Bishan-Toa Payoh GRC), who was concerned about unnecessary expenditure on blocks which might go through HIP II, then be slated for redevelopment under Vers a few years later. 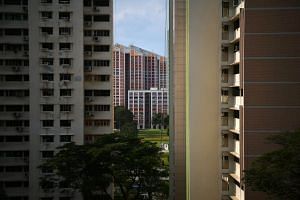 Wider upgrading on horizon while Vers details are ironed out

Private developers may have role in redeveloping older flats

Vers will kick in in two decades, and compensation is due to be less generous than the Selective En bloc Redevelopment Scheme, where HDB flats are compulsorily acquired for redevelopment.

Mr Wong added that technical details of how flats would be valued and priced would have to be worked out further, so as to ensure that Vers is implemented "in a way that is fiscally sustainable in the long term".

As for HIP II, which will focus on common maintenance issues in ageing flats, "we will also need to see how to pace the works to take into account fiscal sustainability and the capacity of our construction industry," said Mr Wong. HIP II is expected to cost billions of dollars.

Mr Wong also addressed safety concerns about flats as the buildings age, noting that there are existing regulatory and inspection regimes to ensure that HDB buildings are structurally safe, both during and after construction.

They include the Periodic Structural Inspection (PSI) regime that ensures that buildings are regularly checked for structural defects. For all residential buildings, the PSI requires that the inspection be carried out every 10 years.

"We will ensure that such regimes remain in place throughout the lifespan of our HDB flats, and will also continue to review our policies and benchmark against other high-rise high-density cities," he said.