New measures will be announced next month: Lawrence Wong

First-time buyers of new and resale Housing Board flats will get more help, with new measures to be announced next month.

Minister for National Development Lawrence Wong said his ministry and the HDB have been reviewing "how we can extend further support to first-timers", and he will share more details next month.

To allow more home seekers to benefit from these changes, the quarterly HDB sales exercise scheduled for this month has been pushed to next month, he added in a Facebook post yesterday.

The next Build-To-Order exercise should see about 3,350 flats in Punggol and Tampines on offer.

In his National Day Rally speech on Sunday, Prime Minister Lee Hsien Loong said the younger ministers have "a few more ideas to support couples to have more kids, and to keep HDB flats affordable", and would announce these later.

Mr Wong said in his post that the Government is constantly looking at ways to help young families set up their first homes.

Several policy changes to help home buyers have been rolled out in recent years. From 2017, the authorities have been giving out up to $50,000 in housing grants for resale flats, an increase from up to $30,000 previously.

Last year, HDB said it would let young couples - including undergraduates and national servicemen aged at least 21 - apply for grants to buy a flat earlier, instead of pushing back their plans because of a lack of income history.

HDB also rolled out flats with shorter waiting times of about 21/2 years, compared with the usual three to four years.

"These changes have improved housing affordability and helped young families to secure their own homes earlier," said Mr Wong. 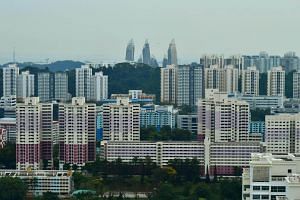 Commenting on Mr Wong's post, Ms Christine Sun, research head at real estate agency OrangeTee & Tie, noted that some younger buyers may have difficulty buying older flats after changes to the amount of Central Provident Fund money that can be used for such homes took effect in May.

Another suggestion she had was to raise the income ceiling for couples buying new HDB flats from $12,000 to $14,000, given the rising median income of Singaporeans.