SINGAPORE - To help more young couples buy their first home, the Housing Board will double the number of flats with shorter waiting times it offers in 2019 to shorten their waiting time.

It will also let them apply for a flat and defer the assessment of their income for the unit to nearer the time they collect the keys. This would let them get their flats earlier while they build up their finances, National Development Minister Lawrence Wong said on Tuesday (March 6).

Announcing the moves in Parliament, Mr Wong said the about 2,000 flats to be offered next year will have a waiting time of two to three years, compared with the usual three to four years.

This year (2018), about 1,100 of such flats will be launched and they will be in Sembawang, Sengkang and Yishun.

Mr Wong told Mr Gan Thiam Poh (Ang Mo Kio GRC) that his ministry is studying how to further reduce the waiting time but cautions that it is not possible to do it for all flats as some sites are not ready.

HDB is also helping younger couples, aged at least 21 years, who want to settle down early, but may not have enough work experience to qualify for grants or loans get a flat sooner. This move will especially benefit undergraduates and national servicemen,

It will do so by allowing such couples, who may not have the current minimum period of 12 months of continuous employment to qualify for a grant, to apply for the flat first. 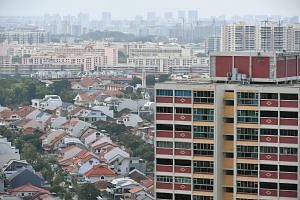 No more wait for divorcees to get subsidised HDB flats

While new flats are already highly subsidised, eligible buyers also stand to get up to $80,000 in additional grants.

The assessment of their income for housing loans and grants will be deferred to just before they collect the keys to their homes. Typically, the key collection takes place around three to four years later, by which time the couple should have enough time to build their finances, said Mr Wong.

He noted that in the existing situation, some young couples may delay applying for a flat for one or two years, then waitinganother four years for the flat to be ready. "That's too long a wait," he said.

For young couples who have considered it carefully, "we can exercise some flexibility to support them in their marriage and parenthood journey", he added.

This option will apply to eligible couples from the next sales exercise in May, he said.

Mr Wong also told the House his ministry is studying how to "further streamline processes" to make buying an HDB flat quicker and easier, on top of the introduction of the Re-offer of Balance Flats sales launch last August.

Among other things, the ministry is checking whether the balloting process for flats can be halved from six weeks to three.

Mr Wong said the system was "much simpler and faster in the past", when successful applicants at a balloting were matched with a flat immediately.

It was possible to do it in the early days because the number of flats and applicants were smaller, he noted.

Now, the HDB serves more than 50,000 applicants annually and has to take note of different priority schemes and ethnic quotas.

Still, he thinks the time taken can be reduced significantly, and he hopes his ministry will be able to announce "some good news before too long".

Correction note: This story has been edited to make it clear that the new scheme allows young couples to apply for grants for HDB flats earlier.