The authorities are looking at ways to improve the safety of building facades, following a recent spate of incidents that saw building parts fall from Housing Board blocks.

Over the past two months, a sunshade, two ceilings and a chunk of cladding board were dislodged in four episodes. The last, which took place three weeks ago at a 51-year- old HDB block in Circuit Road, saw a piece of wall facade plummet more than 10 storeys, crashing into the driveway below.

While no one was injured, the incidents have raised concern among residents, MPs and engineers, who are calling for tighter checks, especially on older buildings.

The Building and Construction Authority (BCA) said it is looking at ways to ramp up the safety of building facades. It is "currently studying overseas regimes and looking into measures to enhance facade safety". These include systems of cities such as Hong Kong and New York. 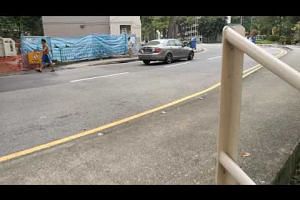 The review comes as the oldest of Singapore's HDB blocks turn 55. Those built in the 1960s and early 1970s - making them older than 40 years - comprise less than 10 per cent of the 9,000-plus public housing blocks today.

Safeguards are in place to ensure their structural integrity: all buildings must be inspected regularly by a professional engineer.

The Periodic Structural Inspection is done every 10 years for residential buildings, and every five years for other buildings, to ensure that structural defects can be detected and rectified early, said the BCA.

Older public housing blocks are checked every five years, the HDB said. It did not specify how it defines "older" blocks.

But such inspections cover only structural parts of a building, such as beams and columns. They exclude facade elements such as sunshades and cladding boards, which were involved in the recent incidents. Schemes like the Neighbourhood Renewal Programme also do not include checks on facade elements.

Still, the BCA stressed that facade parts "remain safe" with regular and proper maintenance. These come under the remit of town councils, charged with regular visual inspections and cyclical repair and redecoration works. The HDB also said it "selectively" conducts annual audit inspections of building facades, particularly of older blocks.

MPs and engineers welcomed the BCA review, but said more pre-emptive steps should be taken.

Ms Tin Pei Ling, one of four MPs who will raise this issue in Parliament today, said: "Perhaps the frequency of checks could be stepped up for older blocks, especially those built in the 1960s."

The Circuit Road block, built in 1965, is in her MacPherson constituency. It is not the first time facade elements have fallen in the constituency. Small tile pieces have fallen from other blocks. She said: "These are not very common, but we still have to view it seriously. It would be unfortunate if they fall and injure unsuspecting elderly people or children. We don't want people to worry about walking beside blocks."

Jurong GRC MP Tan Wu Meng wants closer attention to be paid to potentially higher-risk facade structures, such as those that bear more weight or more elaborate masonry. "The oldest blocks in my ward are about 40 years old. They were built in line with construction norms of that era. With better technology today, we should explore new ways to monitor old buildings more closely."

Engineers said the authorities' checks on blocks should include non-structural, architectural elements that could give way to wear and tear over time. These would include walkway roofs and even block number signs.

Former Institution of Engineers Singapore president Chong Kee Sen said: "We should have a targeted checklist of features that could potentially fall or give way due to ageing. This list shouldn't be exhaustive, but instead evolve and become more comprehensive over time."