On a quiet stretch of Stirling Road, three blocks of freshly painted flats stand unassumingly alongside a mosque, a swimming complex and a petrol station.

Pigeons perch peacefully on their window ledges, not perturbed by either the chatter of diners from a coffee shop below or the constant movement of lifts on every floor.

At first glance, it is easy to miss out the fact that Blocks 45, 48 and 49 are Singapore's oldest blocks built by the HDB, which was formed in 1960.

But a closer look hints at their vintage: old-school letter boxes with latches and rusty keyholes; pipe sockets for laundry poles; small rubbish chutes at the end of each corridor that come without step pedals.

Completed in 1961, the three rental blocks were among the first public flats under the HDB's first five-year programme, which aimed to build flats quickly and cheaply to resettle squatters.

The seven-storey "triplets" were part of the Queenstown estate that the Singapore Improvement Trust had started constructing in the 1950s. Their height, prominent for what was then a mostly undeveloped swampland, earned the neighbourhood the nickname "qik lao" - Hokkien for "seven storeys".

The blocks house tenants in one-, two- and three-room units, and some of them have lived there since they were built 55 years ago. Residents are mainly from the low-income group, paying monthly rents starting from $26 for a one-roomer.

Madam Theresa Thomas, 80, recalls moving into her two-room flat in Block 49 after the Bukit Ho Swee fire of 1961 left thousands of kampung dwellers like her homeless.

"I like living here. It's old but I am very familiar with it and it's so convenient. I can eat downstairs and walk to my church," said Madam Theresa, who lives alone.

Residents said they are not bothered by the buildings' age, and have not encountered falling block parts.

In fact, upgrading works in recent years have seen the blocks spruced up with new lifts and toilets. A fresh coat of paint in June also gave the once-orange blocks new hues of grey and beige.

As with many old blocks, long-time dwellers have struck up intimate friendships. Block 48 resident Annie Chew, 74, whips up dishes such as ikan asam pedas and ayam buah keluak for her neighbours from time to time. Many of the herbs are plucked fresh from her corridor, where she grows everything from rosemary and pandan to laksa leaves and chilli.

"I don't mind that the place is old," said Madam Chew, who has lived there for over 20 years. "I have made good friends here and it really feels like home." 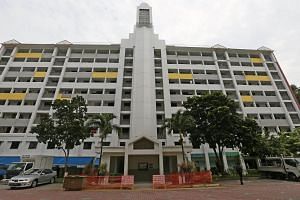 Over at Block 49 which, unlike its sister blocks, has shops on the ground floor, Mr Desmond Leong, 61, has spent the past 30 years or so running Mary Unisex Hair Salon, named after his wife.

His unit may have been plagued by spalling concrete and ceiling leaks, which are common for older blocks, but he still has fond feelings for the place. Having lived in the nearby Mei Ling Street all his life, he recalls catching spiders and fish on a hill as a young boy. That hill is now the MDIS Campus beside his salon.

"Everything has changed here, except these blocks. They really give this area character."