Open-air site to operate till end October, double-storey structure till next August

Businesses at Holland Village have been given a temporary reprieve, as its main open-air carpark, which was slated to close yesterday to make way for a mixed-use development, will now remain in use until the end of October.

Temporary pedestrian walkways will be built by then between the enclave and two alternative carparks.

The adjoining double-storey carpark may remain operational until August next year, according to a notice by developers distributed to businesses and residents in the area.

The delay will provide short-term relief to businesses, who say the closure of the carpark is likely to deter visitors from coming to the popular shopping and eating enclave.

Both dates are subject to change, depending on when works commence, and information boards and directional signs will be erected to inform the public of traffic changes, the notice said.

The deferred closure of Holland Village's main carpark, which comprises 317 spaces in the open-air carpark and 88 in the double-storey structure, is to "minimise inconvenience to the public and disruption to existing businesses in Holland Village", the notice said.

The Straits Times reported earlier this month that businesses were bracing themselves for a slowdown, after the Housing Board had begun notifying motorists of the carpark's closure on Aug 13.

A consortium led by Far East Organization won the tender for the Holland Village extension in May, with plans for a mix of office, residential and retail units, as well as more public spaces. The project is expected to take seven years to complete.

The deferred closure of Holland Village's main carpark, which comprises 317 spaces in the open-air carpark and 88 in the double-storey structure, is to "minimise inconvenience to the public and disruption to existing businesses in Holland Village", the notice said.

In response to queries, Far East Organization said on behalf of the joint venture developers that they "remain keenly sensitive to the needs of the existing community", and are committed to keeping the existing carpark open for as long as possible.

The developers took possession of the site, which includes the carpark previously managed by the Housing Board, yesterday.

The Straits Times understands that all season parking has been transferred to an HDB carpark nearby.

A new underground public carpark will have 486 car spaces and 56 motorcycle spaces when the development is completed in the second quarter of 2025. In the meantime, walkways will be built to connect two Urban Redevelopment Authority carparks in Holland Drive, comprising a total of about 350 spaces, to Holland Village. 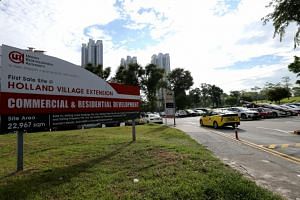 A road will also be built to link Holland Drive and Holland Avenue, while a new pedestrian bridge will provide Holland Vista residents with a direct connection to Holland Village, the developers said.

Mr William Lim, who runs a fruit stall in the wet market adjacent to the open-air carpark, said the delay of its closure is little consolation.

While lunchtime crowds usually pack the carpark, it was half-empty at noon yesterday, said Mr Lim, 55.

"They had been broadcasting yesterday that the carpark would be closed, and today, it was much quieter than usual. When it actually closes, it will have an impact on all the businesses in Holland Village."