SINGAPORE - Universal Studios Singapore and Plaza Singapura were among places visited by Covid-19 patients while they were still infectious, said the Ministry of Health (MOH) on Monday (Sept 21).

The ministry provides the list of locations and the times that infectious Covid-19 patients have visited for at least 30 minutes so others who were there can monitor their health closely for two weeks from the date of their visit.

MOH said that close contacts would already have been notified and that there is no need to avoid these places as these would have been cleaned if needed.

There were 31 new coronavirus cases confirmed on Monday, taking Singapore's total to 57,606.

This included nine new imported cases - seven people returning from India, and two from Iran. All had been serving stay-home notices since arriving.

There were no new cases in the community.

Migrant workers living in dormitories made up the remaining 22 new coronavirus cases announced on Monday.

Among these, 16 were contacts of previous cases who had already been quarantined, and were tested during quarantine, the ministry said.

The remaining six cases were detected through surveillance testing, such as the routine testing of workers in dormitories every fortnight.

No new clusters were announced. 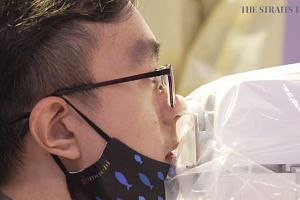 ST reporter takes 4 Covid-19 swab tests: Not as uncomfortable as some may fear

With 60 cases discharged on Monday, 57,226 patients have fully recovered from the disease.

A total of 36 patients remain in hospital, while 302 are recuperating in community facilities. None is in intensive care.

Singapore has had 27 deaths from Covid-19 complications, while 15 who tested positive have died of other causes.