A drug that has been used to treat ovarian cancer since 2014 was approved last month by the Health Sciences Authority (HSA) for treating late-stage breast cancer in patients with a rare genetic mutation.

Called Olaparib, the drug is more effective and less toxic than chemotherapy drugs.

It kills cancer cells containing mutated BRCA1 and BRCA2 genes - which normally function as tumour suppressors - by inhibiting their ability to repair their DNA.

However, Olaparib does not come cheap. A month's supply can cost up to $8,000 before subsidies.

Associate Professor Lee Soo Chin, head of the department of haematology-oncology at the National University Cancer Institute, Singapore (NCIS), said a genetic test is required to determine if the drug is suitable for a patient as it specifically targets mutant BRCA genes, which greatly increase the risk of breast cancer.

She said women with the mutation have a 50 per cent chance of developing breast cancer by age 50 compared with just 2 per cent for most other women. 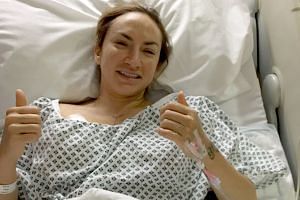 Men who have it are also at a greater risk of getting male breast cancer and prostate cancer.

A recent study, which was led by Prof Lee and involved 460 breast-cancer patients who underwent genetic testing at NCIS, found that the incidence of BRCA mutation varied among ethnic groups.

Prof Lee said women with a family history of breast and ovarian cancer should consider genetic testing, as should those diagnosed with breast cancer before age 40.

These are indicators that the cancer may be inherited.

"Her mother had ovarian cancer and her maternal aunt, who had BRCA mutation, had breast cancer," said Prof Lee.

Despite not having cancer, the actress chose to undergo preventative operations, including a double mastectomy at age 38, after she tested positive for BRCA mutation, Prof Lee added.

Another example is Ms Kwok Pui Yee, 38, who used to work in the investment and finance sector.

Her mother had ovarian cancer and her aunt had breast cancer.

She tested positive for BRCA mutation and was later prescribed Olaparib in January last year under a compassionate access scheme as the HSA had not yet registered it for treating breast cancer here.

Olaparib kept her cancer under control for 13 months with few side effects before becoming ineffective. She is now undergoing immunotherapy.

Ms Kwok's elder sister was also found to have the mutation and has since been going for regular checks.

Said Prof Lee: "Now that Olaparib has been approved for advanced breast cancer, there are ongoing studies on its effectiveness in early breast cancer.

"The next big step is to see if it can be used for prevention."