SINGAPORE - The Ministry of Health (MOH) has given an update on the case of Mr K, a severely disabled man who had his ElderShield payouts ceased for six months.

His situation was brought up in Parliament by Workers' Party MP Sylvia Lim during a debate on CareShield Life, a compulsory government-run disability insurance scheme, in July this year.

She had expressed her concerns that CareShield Life, which will replace ElderShield in 2020, would adopt the same eligibility criteria used in ElderShield.

Mr K, who suffered from an advanced stage of kidney failure and had his leg amputated due to diabetes, was first assessed to be "severely disabled" in September 2014 and began receiving ElderShield payouts.

The ministry said in a Facebook post that the insurer ceased the payouts from October 2016 after a routine disability review in September 2016 by a doctor concluded that he was able to perform all six Activities of Daily Living (ADLs), "albeit requiring some assistance".

Following an appeal from his family, the same doctor reassessed him in November 2016 and found him to be severely disabled and thus eligible for ElderShield benefits again.

But the payouts only resumed in April 2017. Mr K died the next month.

The ministry explained the time gap between Mr K's second assessment and his ElderShield payouts: "Given the change in assessment outcome within the short period of two months, the insurer asked Mr K to obtain a second opinion to confirm his disability status before resuming payouts.

"Mr K was subsequently admitted to a hospice when his condition deteriorated. The insurer resumed the ElderShield payouts in April 2017 after Mr K's hospice submitted an assessment that showed that he was severely disabled then." 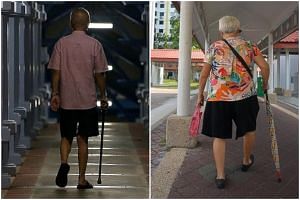 Equal coverage but unequal premiums: Is it fair to charge women more for CareShield Life?

It said that the insurer will backpay Mr K's ElderShield benefits to his family from October 2016 to March 2017.

The ministry said that CareShield Life will have a simpler claims process for the severely disabled than the existing optional disability insurance scheme ElderShield. CareShield Life provides wider coverage than Eldershield. It will feature higher payouts that increase over time with no cap on payout duration.

It will use the same assessment criteria as Eldershield - one needs to require help for at least three out of six ADLs, which are eating, going to the toilet, changing clothes, bathing, transferring from bed to chair and vice versa, moving from room to room.