All staff computers in the public healthcare sector have been disconnected from the Internet, the Ministry of Health (MOH) said yesterday.

The move, however, is temporary, the ministry added, without saying when it will end.

This precautionary measure across the sector comes three days after the authorities revealed that 1.5 million SingHealth patients had their data stolen in Singapore's largest cyber attack to date.

The healthcare group - comprising hospitals, national speciality centres and polyclinics - had its Internet access delinked at midnight on Thursday.

Notices were put up at Khoo Teck Puat Hospital to inform patients that credit card and Nets payments would not be available there, as well as at Yishun Community Hospital and Admiralty Medical Centre. All three are under NHG.

The MOH statement noted that public healthcare institutions, including polyclinics and community hospitals, rely on the Internet for various services.

These include reading diagnostic reports from laboratories, registering births and deaths, making referrals to the private sector and processing payments and claims.

As a result, delinking operations from the Internet could result in a longer wait for consultations and test results, as well as delays in checking Medisave accounts or making claims. 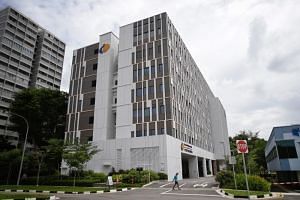 "(Patients) may have to be redirected through a different process from the usual route," MOH said.

"Our healthcare staff are doing their best to assist our patients and to minimise disruptions in operations, while ensuring safe care for our patients."

Meanwhile, he said, staff who need to use the Internet for work have been issued standalone laptops which are not connected to the corporate network.

An NUHS spokesman said its staff worked through the weekend to delink staff Internet access by Sunday night and implement processes to minimise disruption.

"There are some vendor-managed systems that depend on Internet access, and some modifications to workflow will have to be implemented," he added.

Some financial aid and routine claims for bills, for example, will now have to be prioritised, planned and scheduled in batches, which may result in a longer turnaround time.

The spokesman, however, added that major clinical systems and applications - such as electronic health records and patient care services - are located on the NUHS intranet and, hence, are not affected.

The Straits Times visited several public healthcare institutions, where patients said they did not face any unusual delays.

Landscape gardener Navajiat Packiam, 62, who was on time for his check-up at Queenstown Polyclinic, said: "My turn came very fast."