SINGAPORE - Fee benchmarks for 222 common surgical procedures by private surgeons here, such as hip replacement and colonoscopy, were published online on Tuesday (Nov 13) by the Ministry of Health (MOH) on its website, as part of government measures to boost transparency and rein in rising healthcare costs.

The move to publish the recommended charges comes after the Health Ministry accepted recommendations from the Fee Benchmarks Advisory Committee.

The guidelines can also be used by insurers to make their products and claims processes clearer and smoother for patients.

However, healthcare providers do not need to adhere to charges stipulated in the guidelines.

While doctors who charge more than the benchmarks may not be overcharging, the committee said they should inform the patient and insurer before the surgery is performed.

Explaining why some surgeons may charge fees higher than what is recommended, Dr Lim, a cardiologist in private practice who had worked in the public sector for 24 years, said: "For example, a patient may have underlying kidney failure or heart disease, and you have to do extra monitoring and the surgery may have to be done under certain conditions." 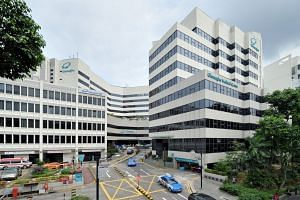 Prescriptions to rein in healthcare costs

Support for move to have medical fee benchmarks

The introduction of fee benchmarks is the latest in a series of recent government measures to rein in rising healthcare costs, the Health Ministry said.

Last year, quality and cost benchmarking for the public healthcare sector were introduced, while the co-payment scheme for new Integrated Shield Plan riders will kick in next year.

Healthcare costs have been rising sharply over the last decade, especially in the private sector.

The average total in-patient bill in the private sector has increased by 9 per cent each year over the last 10 years (2007-2017).

This is almost double the 4.9 per cent increase for bills in the public sector's Class A wards.

Other key factors, including an ageing population, increasing healthcare usage and medical inflation, have also contributed to national healthcare spending rising from $11.4 billion in 2011 to $20.7 billion in 2016.

The Health Ministry had announced last year that it would be introducing fee benchmarks, and appointed an independent committee in January this year to develop an approach.

The calls for fee benchmarks came from the medical community itself, which followed the withdrawal in 2007 of the Singapore Medical Association's (SMA's) guidelines.

SMA's guidelines were withdrawn because of anti-competitive concerns, which were confirmed by the Competition Commission of Singapore in 2010.

However, the new guidelines will not run afoul of anti-competition laws as they are backed by the Health Ministry.

The introduction of fee guidelines was also a key recommendation of the Health Insurance Task Force report in 2016, to improve the transparency of medical costs here.

One of the more prominent cases of overcharging by private specialists was surgeon Susan Lim's bill for seven months of cancer treatment in 2007 for a member of the Bruneian royalty, totalling $24.8 million.

The surgical procedures which have been benchmarked cover more than 85 per cent of cases involving surgery and 75 per cent of professional fees for procedures in the private sector last year.

When determining the guidelines, the committee looked at what was charged for surgery performed for Singaporeans in the private sector in 2017, and also incorporated SMA's 2006 fee guidelines and inflation.

It also considered other factors such as the complexity of the surgery, as well as the time, effort and expertise needed for a typical case.

The committee consulted about 120 private practice specialists, as well as regulators, insurers, the National Trades Union Congress and the Consumers Association of Singapore, among other stakeholders.

Since 2003, the Health Ministry has published information on the total hospital bill size on its website and in 2014, expanded this to include total operation fees.

Senior Minister of State for Health, Dr Lam Pin Min, told the media on Monday that it will probably take the committee between three and five years to do a review in order to update the fee benchmarks.

He added that the committee will decide on the scope of the next review within one to two year's time, to consider including in the guidelines other fees, such as consultation and anaesthetist fees.