SINGAPORE - The danger from dengue is far from over, even as the number of cases here has fallen, the National Environment Agency (NEA) warned on Monday (Jan 25).

There were 156 cases a week in mid-January, compared with 236 infections in mid-December.

However, the population of the Aedes aegypti mosquito, the vector that spreads dengue, has increased by 8 per cent last month.

On top of that, DenV-3 and DenV-4 - two dengue serotypes that are less commonly seen here - populations have increased and now account for more than half the infections.

There are four dengue serotypes. People who have been infected are only protected against that particular type, and not the other three, which means they remain susceptible.

Over the three decades before 2020, all dengue outbreaks here were caused by either DenV-1 or since 2016, by DenV-2. As neither DenV-3 or DenV-4 have infected large numbers of people in the past, the vast majority of the population would be susceptible.

The rise of DenV-3 last year likely contributed to the largest dengue outbreak Singapore has seen, with a total of 35,315 people infected and at least 29 people dying from it.

The NEA said on Monday: "If left unchecked, the current high Aedes aegypti mosquito population, coupled with the not insignificant number of dengue cases currently and the sizeable proportion of residents still working from home, would add to the dengue risk this year."

Calling for greater vigilance against the mosquito-borne disease, the NEA said: "The population immunity for DenV-3 and DenV-4 is low, and more people are susceptible to transmission of the virus.

"This could result in a continued high risk of dengue transmission given the current moderate number of dengue cases and the relatively high Aedes aegypti mosquito population."

DenV-3 was found in the cluster of 19 cases at the intersection of Upper Aljunied Road and MacPherson Road, which includes Jalan Muhibbah and Jalan Mulia.

DenV-4 was found in the Bedok North Street 3 cluster of 46 cases and the Gangsa Road cluster of 21 cases.

These three clusters are among the top five dengue clusters today. The biggest of the 27 current clusters is at Tampines Place with 157 cases.

The agency said last year's record number of infections was caused by a "confluence of factors, some Covid-19-related".

The scene for a major outbreak was set in January, before Covid-19 reared its head, with 303 people down with dengue in the first week of 2020, which the NEA attributed to the "relative dominance of the less common DenV-3 in the first four months of the year".

It added: "The number of weekly cases rose sharply in May 2020, shortly after the start of the circuit breaker period."

At its peak last year in mid-July, 1,793 people were diagnosed with dengue in a week.

Last year, the NEA made about one million inspections for mosquito breeding and found 23,400 breeding habitats.

It had taken 8,100 enforcement actions against premises owners for mosquito breeding and issued about 430 summonses and 37 Stop Work Orders to construction sites.

It promises to "adopt a high tempo of preventive inspections to remove mosquito breeding habitats, and further reduce the risk of dengue transmission". 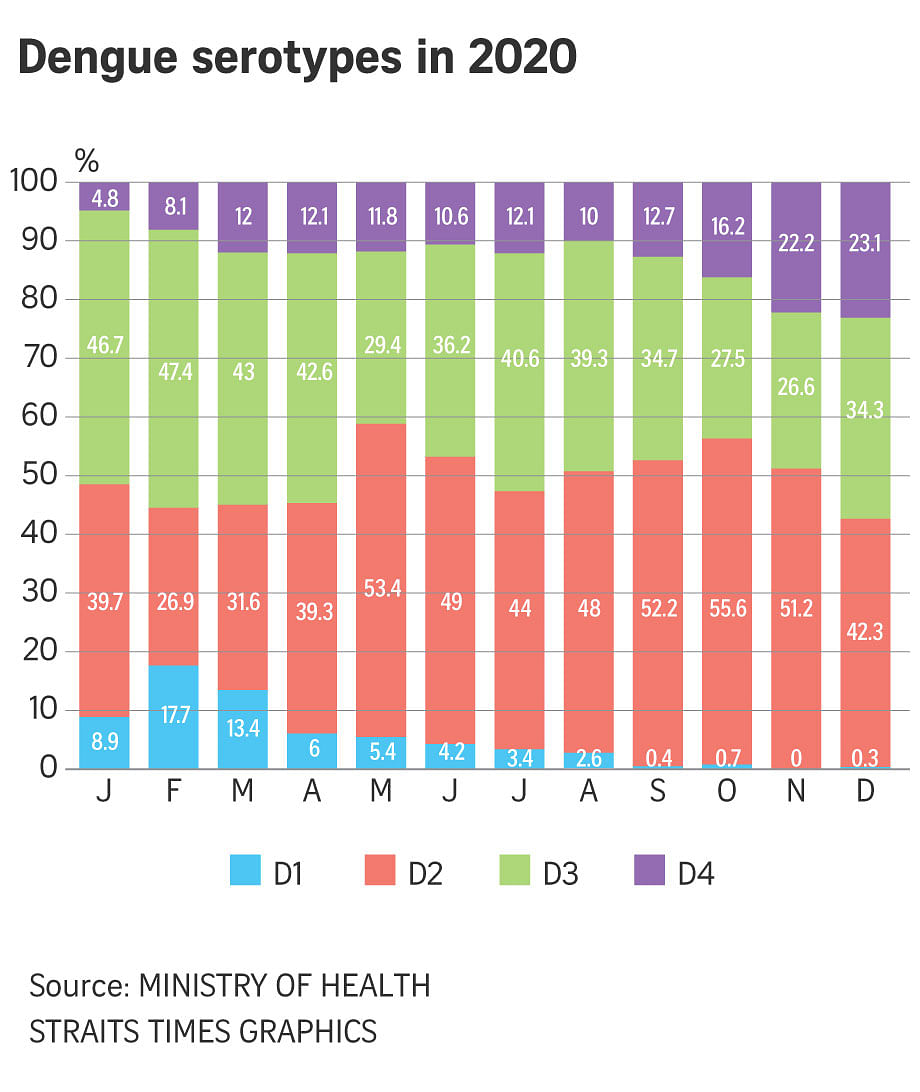