SINGAPORE - The Fernvale columbarium saga in Sengkang West showed the Government would "not shy from making the right decision and reversing it if necessary", said PAP MP Lam Pin Min.

Dr Lam, who is defending his single-seat ward in Sengkang West, acknowledged that the issue could be brought up by the opposition in the days ahead and could affect voters "to a certain extent".

However, the Minister of State for Health also said the matter had since been largely resolved. He was speaking on the sidelines of a SG50 Carnival in Fernvale on Sunday (Aug 30) morning, where an emergency response kit for 87 constituencies was launched.

Dr Lam is likely to face software engineer Koh Choong Yong from the Workers' Party in the coming election. Mr Koh contested the single-member constituency in 2011, and got 41.9 per cent of the vote against Dr Lam.

The columbarium issue sparked controversy in December 2014, when plans to build one next to a Build-to-Order (BTO) residential project in Fernvale Lea met with protests from buyers. 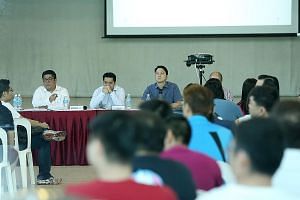 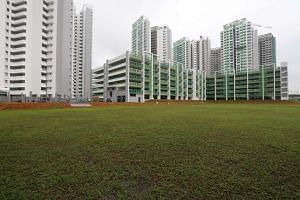 They said their sales brochures had not mentioned it. Questions were also raised about the decision to award a commercial firm the tender on land earmarked for religious use.

In January, the Government shot down plans by funeral services firm Eternal Pure Land to build the commercial columbarium. Earlier this month, a second tender for the site closed with four bidders.

Dr Lam said he personally spoke to Minister of National Development's Khaw Boon Wan on "many occasions" on some of the issues raised by the residents.

Addressing how some residents were upset when he sat at the same table as the commercial developer at a dialogue session in January, Dr Lam said his seat might have been perceived as him having taken sides.

"But that was not the intention. The reassurance from myself and from the agencies was that the purpose of the dialogue session was to gather feedback from the residents," he said.

When asked about infrastructure in the estate, he said there will be a new integrated community facility where the current one-storey Fernvale Point complex stands. The site was initially slated for residential use.

On Friday, Dr Lam wrote on his Facebook page that the Urban Redevelopment Authority has since rezoned it for civic and community use. In future, the site could house a community centre with food options.

He said he is working to address other concerns in the new estate, where 30,097 people will go to the polls. Among his goals is to better engage young residents.

"A lot of activities usually cater to the elderly, the young children. So the young families is one group we have to work very hard to engage," he said.

He said he uses social media to connect with them. For instance, he joins Facebook groups formed by future residents of upcoming BTO projects to track and help solve some of problems such as flat defects faced by new homeowners.

The district has turned into "quite a vibrant community", Dr Lam said. He cited new facilities and developments in the neighbourhood such as Seletar Mall, the Anchorvale Community Centre and the Sengkang Sports and Recreation Centre.

He said residents can also look forward to a new jumbo childcare centre in Fernvale Lea, which will have a capacity of 500 compared to the usual 80 to 100. It is scheduled to begin construction in September and be ready by the middle of next year.

In the works as well are dual carriage LRTs and better bus services that are likely to be rolled out by next year.