The Ministry of Trade and Industry (MTI) announced yesterday that RADM Chew, 43, will be appointed chief executive officer of the Agency for Science, Technology and Research (A*Star) on April 1.

He is currently Deputy Secretary (Technology) at the Ministry of Defence - a position he will continue to helm until the middle of the year.

It was announced last month that Permanent Secretary for Education Chan Lai Fung, 55, would be appointed the agency's non-executive chairman, while current A*Star chief, Mr Lim, 57, a former chief of defence force who has been in the public service for 38 years, would be retiring.

MTI Permanent Secretary Loh Khum Yean said: "With their vast experience across diverse backgrounds, I am confident that Lai Fung and Frederick will be able to take A*Star to greater heights and further its mission of advancing scientific discovery and techno-logical innovation to create economic growth and improve the lives of Singaporeans."

Explaining the change in management structure to a non-executive chairman and CEO, MTI told The Straits Times that the agency had grown remarkably since its establishment in January 2002.

Given its role and importance, A*Star will be transitioning to a non-executive chairman appointment, "typical of most statutory boards in Singapore", it said. 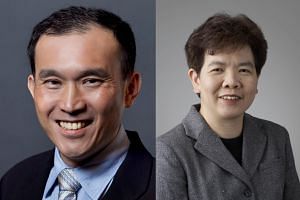 Ms Chan would steer A*Star in charting its strategic direction and priorities, MTI explained, while RADM Chew would assume the agency's executive leadership role and responsibilities.

RADM Chew has held various key positions in the Defence Ministry and the Singapore Armed Forces (SAF), including director of joint operations, commander of maritime security task force and head of naval plans, said MTI, noting that he has made many significant contributions in his various appointments.

As Deputy Secretary (Technology) in Mindef, he has been instrumental in optimising the Defence Technology ecosystem, in particular strengthening Mindef's partnership with industry, it added.

A*Star, which has about 5,200 employees, is recognised as one of the world's top innovative government science and technology organisations.

Last year, it announced its biggest shake-up to date, with broad changes made to the way the research institutes under its charge would be run, in efforts to make the organisation more nimble in the use of talent and funds.

However, some staff say issues such as funding difficulties and uncertainty over the future remain.

One senior staff member, commenting on the appointment, said that it is critical for the incoming CEO to have an in-depth understanding of research and a long-term plan on how to lead the curve in scientific advancement.

The scientist said: "With billions of taxpayer dollars at stake, it is imperative for A*Star's leadership to have a clear vision of what innovation and research are needed for the industries of the future, and how to take that all the way from R&D to commercialisation."