SINGAPORE - The deployment of France's only aircraft carrier group to the region, as part of a five-month mission, demonstrates its commitment to regional security, French Ambassador to Singapore Marc Abensour said on Tuesday (May 28).

"The fact that France is also a security provider in the region, and that is well-illustrated through our shared commitment to freedom of navigation and of overflight," he added.

He also said the shared commitment was the reason the aircraft carrier group will carry out exercises with the Singapore navy and air force, scheduled for next week, to enhance the way the two countries' armed forces work together.

The ambassador was speaking to reporters on board the aircraft carrier Charles De Gaulle at RSS Singapura-Changi Naval Base.

Its deployment, codenamed Mission Clemenceau, will cover areas including the Mediterranean Sea and the Indian Ocean from March to July as part of the carrier strike group named Task Force 473.

The group includes three frigates, one supply ship, one nuclear submarine, as well as helicopters and Rafale fighter jets.

Asked if the French navy will conduct freedom of navigation operations in the South China Sea, Commander of Task Force 473, Rear-Admiral Olivier Lebas, said conducting such operations was not an objective. 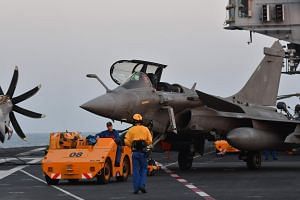 Tensions have flared in the disputed South China Sea over the US freedom of navigation operations and China's territorial claims.

The Charles De Gaulle arrived in Singapore on Tuesday, and will stay for the annual Asia defence forum Shangri-La Dialogue from Friday to Sunday.

Describing the defence ties between France and Singapore as having achieved a high level of mutual trust, Mr Abensour said that it was a pillar of the strategic relationship between the two countries that started in 2013.

He also said that other than celebrating the role former French prime minister Georges Clemenceau played in World War I, the name of the mission also has links to Singapore.

"Clemenceau visited Singapore almost a century ago in 1920. And he was invited to give his name to Singapore. And so this is why you have this name here," he said.