US Republican Senator Marco Rubio and his Democratic counterpart, Senator Ben Cardin, have formally re-introduced the South China Sea and East China Sea Sanctions Act that would "impose sanctions against Chinese individuals and entities that participate in Beijing's illegitimate activities to aggressively assert its expansive maritime and territorial claims in these disputed regions".

The bipartisan Bill is intended to put the brakes on China's consolidation or expansion of its claims of jurisdiction over the sea and airspace in disputed zones in the South China Sea - claimed by Taiwan and several Asean countries, most critically Vietnam and the Philippines; and East China Sea where Beijing's row is with Japan and South Korea.

Experts said the Bill, which was first introduced in 2017, has come too late to change the fait accompli of China's footprint and presence in the disputed zones. Still, it is better late than never, they added.

In the South China Sea, Beijing has reclaimed and built on large areas of land, converting low-lying rock and coral formations into habitable islands and, in some cases, deploying military assets.

"The US can't roll back Chinese island building and militarisation in the South China Sea," Dr Bonnie Glaser, senior adviser for Asia and director of the China Power Project at the Centre for Strategic and International Studies, said.

"In my view, this action is like closing the door after the horse has left the barn. These steps should have been taken years ago," Dr Glaser told The Straits Times. "The important variable is whether the binding language is retained in a final Bill that gets passed into law and signed by the president."

She added: "I hope we can deter China from establishing baselines and an ADIZ (air defence identification zone). That is what this Bill aims to do. I guess better late than never, but is it too little too late?" 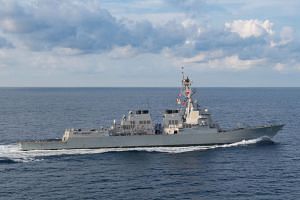 China likely to step up militarisation in South China Sea: US intelligence report

A statement on Mr Rubio's website said: "This legislation is timely, given ongoing efforts by the United States to conduct freedom of navigation operations in support of a free and open Indo-Pacific region."

"Because the Chinese government's ongoing and flagrant violations of international norms in the South China and East China Seas cannot go unchecked, this legislation authorises new sanctions to put Beijing on notice that the United States means business and intends to hold violators accountable," the senator added.

The statement also quoted Senator Cardin as saying: "China has been bully in both the South and East China Seas, encroaching on and intimidating its neighbours. Such aggressive behaviour cannot go on unchecked.

"The United States will defend the free flow of commerce and freedom of navigation, as well as promote the peaceful diplomatic resolution of disputes consistent with international law. I am pleased to join Senator Rubio and our colleagues to send a strong bipartisan message in defence of our national interests and those of our allies and partners in the Asia-Pacific region."

The Bill is co-sponsored by 13 other senators - seven Republicans and six Democrats.

Sanctions would apply to companies and individuals involved in any way in activities from dredging to construction to transportation to deployment of military hardware.

Additionally, US persons will be prohibited from facilitating certain investments in the South China Sea or East China Sea.

The Bill also provides a list of named Chinese entities, and stipulates that the "Secretary of State shall submit to the appropriate congressional committees a report that identifies each Chinese person the secretary determines is engaged in the activities".

It mandates close monitoring and regular reporting. The Bill orders that the US government not publish any documents indicating that it recognises Chinese jurisdiction over territory in the South China Sea "contested by one or more members of the Association of South-east Asian Nations or the territory or airspace of areas of the East China Sea administered by Japan or the Republic of Korea".