SINGAPORE - A former beauty queen was admitted to hospital on Tuesday (June 5) after being hit by an e-scooter, in the latest accident involving personal mobility devices (PMD).

Housewife Cassandra Ho, 49, a grassroots volunteer, was hit by an e-scooter during lunchtime on Tuesday while making her way to a community garden at Bishan-Ang Mo Kio Park. She was there to pick some herbal leaves for a friend's father who had fallen ill.

A spokesman for the Singapore Civil Defence Force told The Straits Times that it was alerted to the accident at 2pm on Tuesday by members of the public.

A woman was taken to Tan Tock Seng Hospital, he added.

Madam Ho, who is still warded at the hospital for further observation, told The Straits Times over the phone that she could not recall what happened though she was conscious after the accident.

"I can't remember much... the next thing I knew, I saw my husband and youngest son beside me in the accident and emergency ward," she said.

Madam Ho, who was crowned Elite Mrs Singapore Asean in 2016, said she hurt her head and face as a result of the accident. 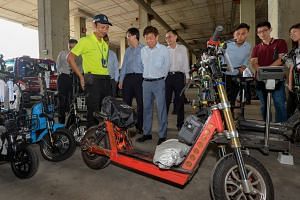 She said many residents have given feedback that public parks were no longer safe spaces to walk in, given the presence of e-scooter riders who move at high speeds.

In March this year, a woman was seriously injured after she was involved in a hit-and-run accident with an e-scooter in Bedok. Similarly, a 65-year-old woman was left with a cut on her nose and multiple bruises on her body after an e-scooter slammed into her in April.

In response, the Land Transport Authority has stepped up enforcement actions by patrolling areas which have a high volume of pedestrians and cyclists.