SINGAPORE - A woman was taken to hospital with head injuries after she was allegedly hit by an electric scooter in Bedok on Wednesday (March 7).

The police told The Straits Times that they were alerted to a case of rash act causing hurt at Block 151, Bedok Reservoir Road, at about 6pm.

A 45-year old woman was conscious when taken to the Changi General Hospital. Police investigations are ongoing.

Lianhe Wanbao said in a report on Saturday that the woman involved is Ms Goh Lay Yong.

Ms Goh told the evening daily in hospital on Saturday morning that she crosses the overhead bridge daily to and from work.

On Wednesday night, she was on her way home and had just stepped off the overhead bridge when an e-scooter hit her from behind, she said.

She lost consciousness immediately and woke up in an ambulance. 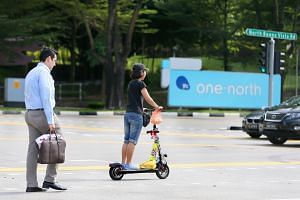 Earlier this week, an e-scooter rider was given the maximum fine of $2,500 after he admitted to injuring a boy while riding the device in a negligent manner.

The Straits Times had earlier reported that 110 accidents involving e-scooters were reported in the first nine months of last year, and the Government is cracking down on reckless riders.

As part of the registration process, users will have to provide their personal particulars as well as paste identification stickers prominently on their devices. They must also ensure that the devices meet requirements, such as a maximum weight of 20kg and a top speed of no more than 25kmh.

Users will have to register their devices from the second half of this year.