SINGAPORE - More than 400 people had food poisoning in three separate incidents in November, leading an MP to say that a bug could have been a cause.

While food hygiene lapses could have been the cause, Dr Chia Shi-Lu, chairman of the Government Parliamentary Committee for Health, said that the scale of the food poisoning cases and the fact that the incidents took place close to each other could suggest there were other causes, such as a bug or contaminated source.

He told The New Paper (TNP) that while investigations were still going on, the fact that there were multiple incidences despite the rigorous food hygiene standards might indicate that it could be something more worrying than just hygiene.

Thus careful investigations are being done to determine the cause so that it can be appropriately tackled, he added.

The Straits Times understands that the latest incident was on Monday (Nov 26), when 131 Kindergarten 2 pupils and teachers fell ill after eating packed meals prepared by FoodTalks Caterer & Manufacturer.

The company, which operates out of Shimei East Kitchen in Bedok, supplied packets of fried macaroni to 115 young children and 16 teachers at a school camp.

The first incident took place on Nov 6, when 81 people at a Deepavali celebration in Kaki Bukit fell sick after eating food packed in bento boxes prepared by Spize restaurant. One of them, Mr Fadli Salleh, 38, died in hospital about a week later.

Last Friday (Nov 23), TungLok Catering, the catering arm of the TungLok restaurant group, had its licence at the Max Atria at Singapore Expo suspended after 190 people reported falling sick after eating food at a Singapore Civil Defence Force event.

The Straits Times understands that a large number of bento boxes had been prepared, with about 1,000 portions served to people at the event.

Staff at 17 catering outlets interviewed by The Straits Times said that though it is not easy to cater food for large crowds, they have seldom had any issues with cleanliness. 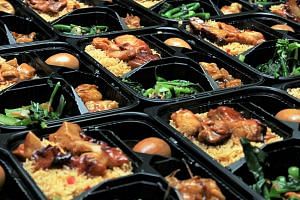 Kids who had food poisoning after lunch in holiday camp have recovered, back at school

According to Mr Soh, the National Environment Agency (NEA) has put in place a standard operating procedure that every operator must follow.

"We follow very strictly the rules concerning time control, temperature control and storage control," he said, referring to some of the rules and requirements imposed by NEA.

Mr Soh said the rules require catered food to be consumed within four hours after it has been cooked, and the temperature o f the food to be maintained to prevent contamination.

Food critic K.F. Seetoh told The Straits Times that the rules and regulations for food caterers are "diligent and clear" and that the onus is on kitchen staff to have respect for the food.

"They (kitchen staff) must know that they are serving a plate of death if they are not careful," he said.

"Having strict governments alone will not help. The staff should practise what they already know," he added.

According to reports on the food poisoning cases to date, the NEA has been working with the Ministry of Health and the Agri-Food and Veterinary Authority to investigate the multiple cases of gastroenteritis. More updates will follow as the investigations are completed and the causes are ascertained.

The NEA website also carries information on food hygiene and safety for consumers, including tips on how they can check if catered food is safe.