SINGAPORE - For many Singaporeans, the journey to home ownership can be long and tedious. Not so for real estate marketing director Leon Chea, 35, and his wife.

The couple, who married last January (2017), found, bought and moved into their resale HDB home in just over three months.

The achievement is largely due to a revamped portal for Housing Board resale flats that was rolled out on Jan 1 this year.

The online portal halves the transaction time to eight weeks when there are no hitches.

The shorter time stems from doing away with one of two appointments with the HDB, as all necessary forms and checks are completed via the portal. As a result, flatbuyers and sellers need to go for only one appointment to sign any documents that require 'wet ink'signatures.

On Monday (Mar 5), Mr Chea and his wife, travel consultant Mandy Chan, 31, were the first to complete a resale transaction on the new portal, becoming proud homeowners of a three-room flat in Hougang Ave 3.

"We thought it was about time for us to get our own place," said Mr Chea, who had been renting a unit in a condominium. "The portal came at the right time, allowing us to get a home earlier"

Mr Choo, who is upgrading to a four-room flat for his two adult daughters to each have their own room, said the process was much quicker than when he bought his first resale flat almost 20 years ago.

"There was a lot of queuing up, and if you forgot a document or got it wrong, you'd have to come back again," he said. "Now, you can settle everything online and get everything done fast, it's very shiok."

The new portal is part of a move to streamline the resale process under the Real Estate Industry Transformation Map. 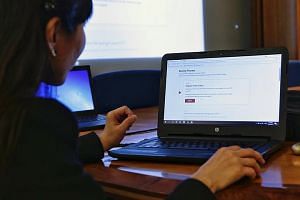 No one wants to buy these HDB flats

The HDB said in a statement on Saturday (Mar 9) that as of end-February, the portal shows about 6,800 owners intend to sell their flat while 7,400 people intend to buy a resale flat. Of these, about 2,000 resale transactions have been approved.

Despite the portal quickening the process, there is no change to the role of real estate agents, said the HDB. "Flat sellers and buyers can continue to engage the services of estate agents to advise and assist them with their transactions, if they wish to do so", it added.

In fact, HDB figures show most buyers and sellers of resale flats use real estate agents.

Mr Chea, who does not see the portal as a threat, said it has helped him to be more productive as a housing agent. While it is still early days, he expects to soon double his monthly pool of four to five clients.

"I used to spend three to four hours on an HDB appointment. Now, I can spend the time saved by going to the office and intensifying my marketing efforts," he said.

The HDB has also introduced other measures that would give buyers the keys to their home earlier. These include Build-to-Order flats with shorter waiting times.

National Development Minister Lawrence Wong had said this week his ministry is looking as well into whether the balloting process for flats can be halved from six weeks to three.