SINGAPORE - A fibre cable cut incident on Wednesday afternoon (Nov 14) in the eastern part of Singapore which affected about 10,000 households was fully resolved on Thursday night, according to Fibre broadband network builder NetLink Trust .

In its latest update, NetLink Trust added that the errant third-party contractor who severed a number of cables while performing construction works along Tampines Avenue 9, leading to the interruption, was not engaged by NetLink Trust or its vendors.

Earlier on Thursday, all three major telcos Singtel, StarHub and M1, as well as Internet service provider MyRepublic said most of their services had been restored.

StarHub's latest update at 7.25pm said that most of its affected fibre services are back to normal, and that it will continue to work with NetLink Trust to fix the issue for remaining affected customers as quickly as possible.

In a 1.40pm update on Thursday, Singtel said in a Facebook post that "virtually all of the services affected" by the cut have been restored.

Earlier in the morning, Singtel said that all fixed voice services were restored by 2am.

M1 said at 11.56am that services for most of its affected customers have been restored, although full service restoration is still underway. 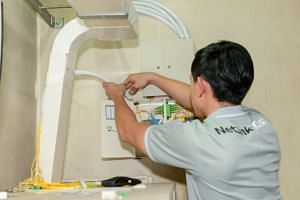 Fibre broadband outage hits 10,000 customers, service for some could be restored after 24 hours

Similarly, MyRepublic said that most of its affected lines have been restored and that it is in close contact with NetLink Trust to ensure the restoration of remaining affected lines.

Both Singtel and M1 said that affected customers will receive a local mobile data waiver for the period of the interruption.

StarHub also said that, as a gesture of goodwill and appreciation, it will offer affected fibre customers a $10 rebate on their December bill.

NetLink Trust first received reports of a fibre service interruption at around 2.50pm on Wednesday.

It said that the interruption was caused by a contractor which severed a number of fibre cables while performing construction works along Tampines Avenue 9 for a third party.

It said in an update on Thursday morning: "NetLink Trust takes a serious view of such disruption in services caused by errant third parties. NetLink Trust is investigating this matter and will take all necessary actions against the errant contractor to protect our interests."

The network builder deployed its recovery team onsite is working with relevant parties to restore services to all affected areas, which includes the vicinity around Pasir Ris, Tampines, Changi and Loyang.