The decline was due to a fall in both civil and Muslim marriages, according to the Department of Statistics, which released the 2018 marriage and divorce statistics on Tuesday (July 30).

The decrease was due to the fall in divorces or annulments among non-Muslim couples, which more than offset the slight increase in Muslim divorces.

Those interviewed say that financial considerations could have contributed to the falling number of marriages and divorces last year, especially given the volatile economy.

It is costly to wed given the outlay on holding a wedding and buying a flat. And it is equally expensive to divorce, as the couple have to split their assets and spend on finding new housing. 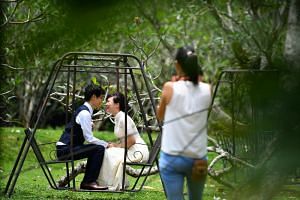 Sharp drop in number of people getting married before turning 21

As in previous years, the age at which people here have been marrying continues to rise.

This is because more people spend a longer time getting an education and building up their careers before they settle down, said National University of Singapore sociologist Tan Ern Ser.

She said: "People believe that marriage is forever and unless they are very sure they have found a life partner, they wouldn't marry."

In the case of assistant engineer Mohamed Riyazad Ali, 37, his wedding last year with Ms Siti Saude, 31, who works in an administrative role in a hospital, was arranged by their parents.

They got to know each other for two months before getting engaged.

He said: "Both of us were interested in getting married and our parents arranged it for us."

Sociologists, meanwhile, point out that there are serious implications on both a personal and societal levels of Singaporeans marrying later.

For example, as a woman's fertility declines with age, these later marriages could result in fewer babies being born.

The number of babies born here last year fell to an eight-year low, according to the Report on Registration of Births and Deaths 2018 published by the Immigration and Checkpoints Authority (ICA).

Another trend is that more people are marrying someone of a different race.

With more people working or studying abroad and more foreigners basing themselves here, the chances of meeting and marrying a foreigner is higher.

Prof Straughan said that the barriers to friendship and marriage across races have weakened as people are more educated, better travelled and more open.

She said: "As people get to know one another, regardless of their race or background, prejudices melt. Singapore is all about integration and inter-ethnic marriages is the ultimate level of integration."

Take for example, Mr Nikhil Bhardwaj, a 29-year-old Indian Singaporean who married Deirdre Lee, 30, last year. Mr Bhardwaj said his wife is his sister's friend and the pair, who are both insurance agents, dated for over five years before tying the knot.

The couple's families were very supportive of their union. Growing up, most of Mr Bhardwaj's friends were Chinese, he added, so marrying someone outside his race was not an issue for him.

He said: "There were no objections from my family. To my family, if she makes me happy and she keeps me in the right direction then 'go for it'."