A greying population means deaths have been on an upward trajectory since at least 1998, when there were 15,657 deaths.

National University of Singapore (NUS) sociologist Tan Ern Ser said the downward trend in births will generally continue. This is a concern, he added, as the population must be replenished to ensure that a vibrant economy can be maintained, which can also support a greying population. 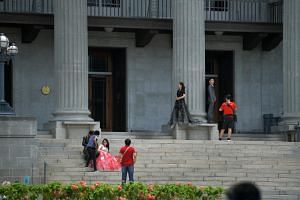 Most newlyweds in Singapore want to have babies, but are not planning ahead: Survey

But increased uncertainties because of digital disruption, global financial volatility and climate change also play a part, said Professor Jean Yeung, director of the Centre for Family and Population Research at NUS.

"(These factors) might prompt couples to think even more carefully about whether to bring a baby into the world or not," she said.

The median age of resident live births for first-time mothers was 30.6 years last year, compared with 29.7 years in 2009. This itself is a cause for concern, said Prof Yeung, as fertility decreases with age.

Junior art director Mohammed Farhan Hassan, 37, and his wife, a 33-year-old teacher, were lucky to welcome a daughter last year.

"We got married in 2017 and met just three years before that, so we ended up having a child when we were a bit older," he said.

The couple want another child. "Our main concern is whether we can balance this with our work schedules, but I believe this is something we can work out," he said.

Employers should do more to help workers find a balance, said Singapore Management University professor of sociology (practice) Paulin Straughan. "Human resource departments should review their evaluation frameworks and make sure we don't overly reward and encourage the over-committed," she said. Singapore may have to review its stance on immigration if births keep dipping, she added, but this should be a last resort.