Move to help with cost of living; it will also offer Merdeka Generation discount from July

To help moderate the rising cost of living and protect shoppers from price fluctuations, FairPrice has pledged to freeze the prices of 100 FairPrice house brand products for the next 15 months.

More than half of these products also had their prices slashed by up to 30 per cent as of yesterday, in order to ensure all items in the basket of goods are priced at least 20 per cent cheaper than comparable leading brands, the supermarket chain said.

They have been selected to represent popular daily essentials purchased by the average Singapore household, FairPrice said.

The vow to hold the prices of these staples steady until June 30 next year is an effort to "help cushion Singaporeans against possible price increases for everyday essentials over the next year, regardless of changes in supply and external factors", and to set the industry benchmark for prices of these goods, it said.

Members of the Merdeka Generation, which refers to Singaporeans born in the 1950s, will soon be able to enjoy a 3 per cent discount on purchases at all FairPrice outlets on Wednesdays under a $2.7 million scheme.

Under the year-long programme that starts on July 1, they can obtain the discount by showing their Merdeka Generation Card or other valid identification at the cashier's counter.

Since 2014, Pioneer Generation shoppers have been entitled to a 3 per cent discount on purchases every Monday. The discount scheme was extended to include Thursdays in 2017, and will now run an extra year until the end of June next year, FairPrice said.

Pioneer Generation members are Singaporeans who were aged 16 and older in 1965.

Close to $7 million in discounts was given out to senior citizens and Pioneer Generation shoppers last year.

FairPrice chief executive Seah Kian Peng said at a media briefing at the FairPrice Xtra outlet in Kallang Wave Mall yesterday that this is the first time the supermarket chain will be freezing the prices of a basket of goods for such a long period. 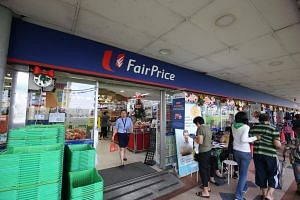 The move is part of efforts by the National Trades Union Congress' (NTUC) group of social enterprises to address cost of living issues, Mr Seah said.

"We always try to hold our prices stable, but there are many things that are out of our control. If there is a poor harvest, if there is a strike, a lot of things can give rise to shocks, and therefore it is hard to maintain stable prices," he said.

FairPrice's house brands source their products from different countries and engage in contract farming, among other efforts, to keep prices low, he said.

Details on initiatives to moderate the prices of cooked food through the NTUC Foodfare and Kopitiam food centres will be announced next month, he added.

NTUC Enterprise acquired Kopitiam at the end of last year.

In the area of groceries, FairPrice will be broadening the product range of its house brands to new categories, such as over-the-counter medication and soft drinks.

Education efforts on how consumers can stretch their dollar and the house brand options available at its supermarkets will also be stepped up, said Mr Seah. FairPrice's house brand products account for about 20 per cent of its overall sales.

NTUC secretary-general Ng Chee Meng said that FairPrice's latest move is the result of feedback over the past year "from both our workers and Singaporeans that they would like some help with the cost of living".

Housewife Carmen Ng, who was shopping at the Kallang Wave outlet yesterday, said that she already buys house brand products for items such as rice, oil and fresh produce during her weekly trips to the supermarket.

Mrs Ng, 42, who has three children, said that the steeper discounts "are definitely helpful, especially when you have a lot of mouths to feed".