SINGAPORE - The Republic may experience haze in the next few weeks or even months with drier conditions expected, said the weatherman on Friday (Aug 2).

This is a potentially longer period than the first two weeks of August forecast on Thursday.

The National Environment Agency's Meteorological Service Singapore (MSS) said on Friday that it is forecasting drier-than-normal weather conditions here and in the surrounding region, including Sumatra and Kalimantan, in the coming weeks.

This means that the hot weather Singapore has been experiencing is set to persist, as drier weather can be expected from August to October.

The total rainfall recorded for July in Changi is 92 per cent below the long-term average, breaking the record set in 1997 for the driest July in Singapore. This year's July is also Singapore's second warmest July on record, with an average temperature of 29 deg C.

Dry weather has also persisted over southern Sumatra and Kalimantan.

In recent days, persistent hot spot activities with smoke plumes have been observed in Riau and Jambi provinces in Sumatra and in the southern parts of Kalimantan. These conditions can lead to a rise in the risk of transboundary haze occurrence in Singapore and the surrounding region, said the weatherman. 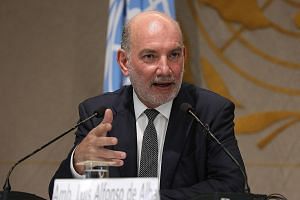 Malaysians brace for hazy days due to Sumatra fires

Progress made in efforts to reduce fire risk: Indonesia

The likelihood of haze affecting Singapore is dependent on factors such as the proximity and extent of the fires, the direction and strength of the prevailing winds and the incidence of rain, said MSS.

MSS said it will "continue to closely monitor the regional weather and haze situation, and provide updates when necessary".

Six provinces in Indonesia, including three close to Singapore, have declared a state of emergency to battle land and forest fires as the dry season is set to peak in August.

Areas in Malaysia including Selangor, Kuala Lumpur, Putrajaya, Negeri Sembilan and Penang have already been affected by the haze due to the fires in Riau.

"The haze is caused by a moderate amount of smog moving from hot spots in the central and southern parts of Sumatra due to the south-west monsoon winds," Malaysian Meteorological Department director-general Jailan Simon was quoted as saying in The Star daily on Friday.

The air quality rose to unhealthy levels in at least two places in Malaysia on Friday, with the Air Pollutant Index (API) hitting 104 in Rompin in Pahang, and 110 in Johan Setia in Klang. Other areas with relatively high API levels were Nilai in Negeri Sembilan (89), Cheras (85) and Putrajaya (85). A reading above 50 indicates moderate air quality, while that above 100 indicates unhealthy air.

According to Indonesia’s National Disaster Management Agency (BNPB), 433 hot spots across the country were detected by satellites on Tuesday morning.

The latest hot spot figures compare with over 750 hot spots on Sumatra island alone in mid-October 2015 - at the peak of the national fire crisis caused by massive burning to clear land for oil palm and rubber plantations.

That year, Singapore, Malaysia and parts of Thailand and Indonesia were covered with choking haze for over a month.

Meteorologists at the MSS believe a key reason for the dry weather in Singapore could be due to the Indian Ocean Diopole (IOD) - a phenomenon where there are sustained shifts between the sea surface temperatures of the tropical western and eastern Indian Ocean.

"The IOD varies between three phases - positive, negative and neutral. A positive phase occurs when cooler sea surface temperatures develop in the eastern Indian Ocean, resulting in below normal rainfall in the eastern Indian Ocean and the surrounding region. Each phase occurs every three to five years on average and typically lasts about six months," said the MSS in a media statement.

"The IOD is currently in its positive phase, which leads to drier weather over the areas adjacent to the eastern Indian Ocean, including Sumatra, Malaysia and Singapore. Major climate centres are predicting that the positive phase of the IOD is expected to persist over the coming months." the statement added.