SINGAPORE - Warm and dry weather conditions can be expected to continue in August after a record dry July, the Meteorological Service Singapore (MSS) said on Thursday (Aug 1).

The weather in the next two weeks is forecast to be drier than the last two weeks of July. It may also be windy on some days, and there could be showers for a short period of time in certain places on four or five days.

The rainfall in the next two weeks is likely to be "well-below normal", said the MSS.

The next two weeks are expected to be as warm as the last two weeks of July.

The daily temperature is forecast to range between 26 and 33 deg C, and it could exceed 34 deg C on some days.

On several nights, warm and humid conditions can be expected, with miminum temperatures of about 28 deg C.

The surrounding region is also expected to experience dry weather in the coming weeks. Hot spots with smoke plumes have been observed in central Sumatra and southern Kalimantan in recent days. 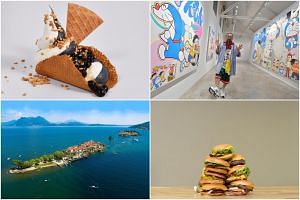 Feeling the heat? Cool down with hot weather hacks

Expect more rain, thundery showers in the next two weeks

Depending on the direction of prevailing winds and location of the fires, Singapore may experience occasional haze in the next two weeks.

At the Changi climate station, the total rainfall recorded for July was 12.2mm, making it the driest July in Singapore since rainfall records began in 1869. The previous record was 18.6mm set in July 1997.

It was also a warm month, with the monthly average temperature hitting 29 deg C. This ranks the month as the second warmest July since temperature records began in 1929.

The warmest July was recorded in 2015 with an average temperature of 29.1 deg C.