Attractions and dining establishments at Resorts World Sentosa (RWS) have stopped providing plastic straws since Oct 1 as part of an effort to cut down on the use of single-use plastics.

RWS said in a statement yesterday that the move should eliminate more than three million straws a year, or about 1.2 tonnes of plastic. This will help reduce marine plastic pollution.

Guests who buy souvenir cups need not worry, however, as the move affects only single-use plastic straws.

An RWS spokesman told The Straits Times that the integrated resort's outlets will continue to include straws with its souvenir cups, as these are not intended to be single-use straws.

Recognising that some of its guests, such as those with special needs or disabilities, might still require straws to consume their drinks, RWS said paper straws will be available on request.

These straws are more biodegradable and environmentally friendly than plastic straws, which conservationists say are responsible for pollution and endangering marine life.

In addition to its straw-free initiative, RWS said it has engaged 13,000 of its staff members to raise awareness about plastic pollution and garner their support for its efforts to go green. 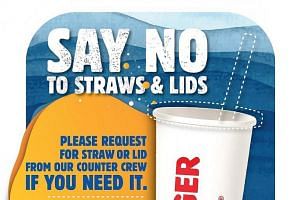 RWS said it supports Singapore's national effort towards becoming a zero-waste nation, and is looking into ways to reduce other forms of single-use plastics such as disposable water bottles.

The integrated resort's conservation measures come as many organisations in Singapore take measures to cut plastic use.

In June, fast-food chain KFC said it would no longer provide plastic straws or use plastic lids for drinks.

Six hotels, including Grand Copthorne Waterfront Hotel and M Hotel, also pledged to eliminate single-use plastics by June next year and replace them with greener alternatives.