SINGAPORE - Plastic disposables such as straws and toiletry bottles will soon be a thing of the past for several hotels in Singapore.

Ahead of World Environment Day next Tuesday (June 5), the Millennium Hotels and Resorts (MHR) group has pledged to eliminate single-use plastics from all six of its Singapore hotels by June next year.

Over the next one year, the hotels will gradually phase out the use of disposables such as straws, stirrers, cutlery, toiletry bottles and plastic bags, and opt for alternatives that are made with more environmentally-friendly materials such as paper and wood.

In a press release on Thursday, MHR said the move comes as part of an effort to join the global fight against plastics.

"While the hotel industry benefits from the convenience of using plastic products, we see that it has long-lasting adverse impact on the environment," said Mr Lee Richards, vice-president of operations (South-east Asia) at MHR.

According to the United Nations Environment Programme, over 13 million tonnes of plastic leak into the ocean every year, killing 100,000 marine animals annually.

M Social has already replaced plastic straws with paper ones. The hotel is also using environmentally-friendly packaging, such as paper boxes and wooden cutlery for its takeaway service "Order & Grab". 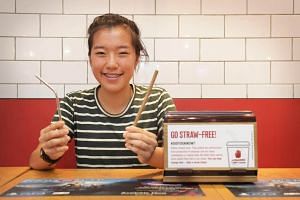 Spotted straw-free initiatives at some eateries here? It's all thanks to this 17-year-old

The other five hotels under MHR will soon replace plastic straws and stirrers used in restaurants and for room service with greener alternatives, including paper straws.

Orchard Hotel and Studio M are also in the process of changing plastic toiletry containers to dispensers in hotel rooms.

The changes will affect more than 2,600 rooms in all the six hotels.

Environmentally-conscious guests will also be able to play a part in the green efforts, by opting not to have their towels and bed linens change daily.

With the six hotels producing an average 67kg of plastics weekly, the initiative will greatly cut down on the amount of pollutive waste by the group, and save it nearly $500,000 a year in terms of expenditure on plastic products.

MHR's pledge follows Hilton's recent announcement on May 25 that it will eliminate plastic straws across its 23 managed hotels in Asia Pacific by the end of this year. This is part of Hilton's plan to halve its environmental footprint by 2030.

While some acknowledge that the changes might be jarring, they are generally welcomed.

Said student Rachel Tey, 17: "We may no longer be able to keep souvenirs of hotel shampoo bottles and toiletries, but I think it's a cost I'm very happy to pay for reducing our environmental impact."

"In fact, I think having these waste reducing initiatives in hotels is a selling point for these hotels."