SINGAPORE - The number of new dengue cases dropped for the second straight week, with the latest figures on the National Environment Agency's (NEA) dengue microsite reporting a total of 226 cases in the week from April 10 to 16.

This was 65 cases fewer than the previous week, and the lowest weekly figure since the start of the year.

Another 35 cases were reported between Sunday (April 17) and 3.30pm on Monday. Thus far, almost 6,900 people have been diagnosed with the mosquito-borne virus - almost three times the number experienced at the same time last year.

Four people have also died from dengue this year, matching the number seen in the whole of 2015. The latest death last month was that of a 73-year-old woman who lived at Poh Huat Road West.

While weekly figures have generally been on the downward trend over the past couple of weeks, NEA warned that numbers are still high for this time of the year.

Dengue cases have been predicted to reach a record 30,000 this year.

There are 52 active dengue clusters as of Monday (April 18), with 12 of them designated as high-risk areas. In the face of a particularly hot spell being experienced in Singapore, the authorities have taken an active role in its efforts to curb the viral infection. 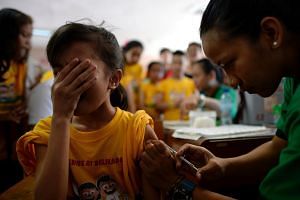 These include the introduction of a $200 fine on March 14 for anyone found to have mosquitoes breeding in their homes.

Last week, the Health Sciences Authority announced it was speeding up its evaluation of the world's first dengue vaccine, and is expected to decide on whether the vaccine is approved for use here in around six months.

The vaccine, produced by pharmaceutical firm Sanofi-Pasteur, is currently approved for use in four countries.

Environment and Water Resources Minister Masagos Zulkifli also said in Parliament that a field study will be conducted at the end of this year, which aims to assess if a special type of mosquito - the male Wolbachia-carrying Aedes aegypti mosquito - can be used as a weapon against dengue.