SINGAPORE - The number of new dengue cases fell to 292 last week, 85 fewer than in the previous week, according to figures from the National Environment Agency (NEA).

"Although the number of weekly reported dengue cases is lower than that for some of the past weeks, it is still high for this time of the year," the NEA said in an advisory on its website.

"The majority of mosquito breeding is still being found in homes, such as in domestic containers, flower pot plates and trays."

So far, more than 6,600 people have been diagnosed with the viral infection - three times the number seen at this time last year.

Four people have died this year, as many as the number who died of dengue in the whole of last year.

The biggest cluster of cases is currently around Pasir Ris View, Riverina View, Riverina Walk and Elias Road. A total of 73 cases have been reported in the area, including 24 in the last fortnight. 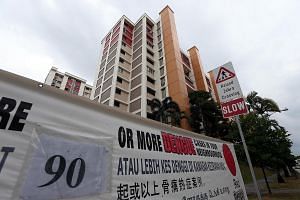 Dengue cases on the rise again after last month's drop

The areas surrounding Jedburgh Gardens, Wilton Gardens, Bowmont Gardens and Siglap Rise have also reported 73 cases, including two in the past two weeks.

Experts have already warned that there could be a major epidemic this year due to the unusually large number of infections at the start of the year - traditionally a low period for such mosquito-borne infections.

A $200 fine was introduced on March 14 for anyone found to have mosquitoes breeding in their homes. Previously, the penalty was imposed only on homes in active dengue clusters.

Mosquitoes mature faster in hot weather, and the current unseasonably hot spell is likely to lead to an increase in the population of the Aedes mosquito, which spreads dengue.

Another worry this year is the change in viral strain towards the end of last year. Historically, a change in strain has always resulted in a surge in dengue cases. This is because of lower immunity in people against the new dominant strain.