SINGAPORE - A crocodile was caught after it was spotted in a drain in Sungei Kadut on Friday (June 21).

In response to queries, National Parks Board director of wildlife management How Choon Beng said that NParks was alerted to the sighting of an estuarine crocodile in a drain in Sungei Kadut Drive at 8.20am.

NParks officers worked with trained contractors to secure the crocodile, which has been transferred to a crocodile farm, Mr How said.

Videos taken of the crocodile and shared on social media on Friday afternoon showed the reptile lying in a drain.

Photos of the crocodile tied up and lying on the pavement were circulated online as well.

ST understands that the crocodile is about 3.4m-long and was believed to have entered the drainage system from Sungei Pang Sua.

National water agency PUB told The Straits Times that its officers will be patrolling the surrounding drains in Sungei Kadut and the nearby Kranji Reservoir over the next few days in case there are other crocodiles.

In February, an estuarine crocodile was sighted at Lower Seletar Reservoir. It was caught by the authorities as a safety precaution, as the area is popular for water activities such as kayaking and fishing. 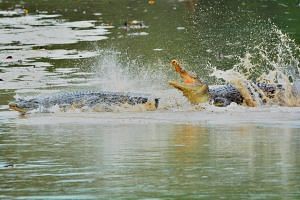 Malaysia coastal works may be why croc sightings here are rising: Experts

It was reported in March that there are at least 20 estuarine crocodiles in Singapore today.

Members of the public are advised to stay calm and back away slowly should they encounter a crocodile, and should not approach, provoke or feed the animal.

The public can call the Animal Response Centre on 1800-476-1600 or visit www.avs.gov.sg/feedback to report such encounters.