SINGAPORE - A burning smell reported in parts of Singapore recently is likely due to a fire in southern Johor, the National Environment Agency (NEA) said.

The agency told The Straits Times on Monday (Feb 25) that it received feedback on a burning smell in the eastern part of Singapore between 9pm on Sunday (Feb 24) and 11am on Monday.

"A hot spot has been detected in southern Johor about 30km to the east of Singapore," NEA said. The agency has not been able to ascertain the exact source of the fire due to the cloudy weather.

It added that prevailing winds over Singapore have been blowing from the north-east, but a change in the wind direction could bring slightly hazy conditions to the Republic.

Netizens have been complaining about the burning smell on social media, with threads on discussion forum Reddit highlighting the smell in both the eastern and western parts of the island.

NEA said that it received feedback on the burning smell only in the eastern part of Singapore during this latest episode.

Reddit user Awedrck said late Sunday night that he noticed the burning smell in Siglap, and it was causing his throat to hurt.

Several users on the site also complained that the smell made it hard for them to sleep. 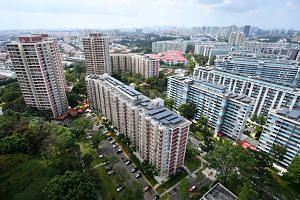 Burning smell in eastern Singapore due to fire at landfill in Johor: NEA

On Sunday night, Facebook user Brandon Lee said that there was "a very strong burning smell in the air" around Woodlands. He started noticing the smell around 8pm, he added.

The Pollutant Standards Index (PSI) in the east between 9pm on Sunday and 11am on Monday ranged from 52 to 55, putting it in the "moderate" range, which is from 51 to 100.

The one-hour PM2.5 readings in the east ranged from 7 to 30 micrograms per cubic metre, which is in the "normal" range. PM2.5 is the dominant pollutant during haze episodes.

NEA said on Monday that members of the public, including the elderly, children and those with lung or heart diseases, can continue with their normal activities.

"We are closely monitoring the air quality, and will provide updates on further findings or significant changes to the air quality situation if necessary," the agency said.

Singaporeans have been complaining about burning smells in the last month.

On Feb 8, a strong burning smell was reported in several parts of eastern Singapore, due to a fire at a landfill in Bandar Tenggara in south-eastern Johor.

Another fire in Johor, this time at the Tanjong Langsat landfill in Pasir Gudang, was the likely cause of a burning smell in north-east Singapore in mid-February.