SINGAPORE - The National Environment Agency (NEA) has pinpointed the source of a burning smell in eastern Singapore to a fire at a Johor landfill.

The spokesman said that during NEA’s checks, it also contacted Johor's Department of Environment, who confirmed on Saturday morning (Feb 9) that there had been a fire at a landfill in Bandar Tenggara, in south-eastern Johor.

“The fire has been burning since Feb 5, 2019, and the Malaysian authorities have been working around the clock to stop the burning,” he added.

NEA confirmed that it has continued to receive feedback of a smoky smell in the eastern part of Singapore since 10pm on Friday.

The winds over Singapore have been blowing from the north-east over the past few days and are forecasted to persist for the next few days, said the spokesman.

Some Singaporeans were still experiencing a burning smell on Saturday morning, according to posts on social media.

The smell had also apparently returned on Friday night, affecting people between 10pm and 3am.

Facebook user Chandrakanth Kamath said that the smell started again at around 11.30pm in Simei that night, while a resident in Tampines said that she smelled it at 11pm.

People on social media said that this was affecting them physically.

On Twitter, user Soshimood said at 12am: "Haze clouding the east, my eyes are so dry."

Another user said that her eyes hurt from the haze.

the haze is so bad that my eyes hurts 😪😪😪 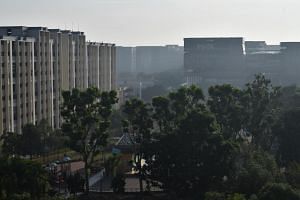 At 1am, user Wang Qing Wei tweeted: "Room smells so hazy to the point where I could hardly breathe."

Residents in Paya Lebar also experienced the same burning smell at 3am.

According to the NEA website, the PSI on Friday night peaked at 68 from 12am to 3am for the east, which is in the moderate range.

Earlier on Friday morning, a strong burning smell was reported over several parts of eastern Singapore, including Tampines, Bedok and Pasir Ris.

On Friday afternoon, NEA said: "We are closely monitoring the air quality and will provide updates of any further findings or significant change to the air quality situation."

Hey, @NEAsg, the burning smell is back in Tampines. Can you please explain why it's not from 'transboundary haze'?