SINGAPORE - Video blogger Nuseir Yassin of Nas Daily fame clarified on Saturday (Aug 17) on Facebook that a Vietnamese person his Singapore company is looking to hire will be based in Vietnam after being trained here for a few months.

The clarification came after the Tripartite Alliance for Fair and Progressive Employment Practices (Tafep) said that it was looking into a posting by Mr Yassin last Monday on the matter on the Nas Daily Vietnamese Facebook page.

Mr Yassin, popularly known as Nas, had then said he wanted to hire a Vietnamese person "to join my team in Singapore".

"I'm looking for the best video maker in Vietnam to join me in a full-time position," he wrote on the Nas Daily Vietnamese Facebook page, which has some 71,200 followers.

"You have to know how to make videos. You have to be the best at shooting or editing."

He asked job-seekers to e-mail their applications to him, before offering a reward of US$500 (S$692) to the person who shared the post with the successful job applicant.

Mr Yassin, a 27-year-old Palestinian-Israeli, moved to Singapore in April to set up the Nas Daily Media Company.

His Facebook page Nas Daily has a following of about 13 million people.

Responding to media queries on Mr Yassin's  original post, Tafep said on Saturday that it expects all employers to abide by the Tripartite Guidelines on Fair Employment Practices, which applies to all Singapore-based jobs, regardless of the medium in which the job advertisement is posted.

Under the guidelines, words and phrases that exclude Singaporeans or indicate a preference for non-Singaporeans should not be used. 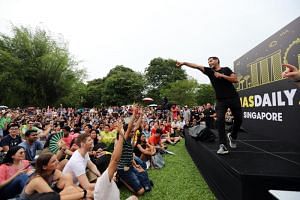 Nas Daily draws 2,000 in first meet-and-greet since moving to Singapore

'I'm putting my money where my mouth is,' says Nas Daily vlogger

Lunch With Sumiko: Viral vlogger behind Nas Daily is uniting the world, one minute at a time

The framework details fair hiring requirements for companies in Singapore, including advertising in the Jobs Bank.

Advertisements must be open to Singaporeans and run for at least 14 calendar days before companies apply for Employment Passes.

Companies are exempted from these requirements if they have fewer than 10 employees, pay a fixed monthly salary of $15,000 and above, or if the job is on a short-term basis.

"Tafep takes a serious view of all forms of discriminatory employment practices, which are not in adherence with (the fair employment guidelines)," the spokesman said.

"We work closely with the Ministry of Manpower to take appropriate action against the employer should breaches of the (guidelines and framework) requirements be found."

On the hiring matter, Mr Yassin said on Saturday that he wanted to hire a Vietnamese person as his company is growing fast, especially the Nas Daily Vietnamese Facebook page. "That's why I want the best video maker to join me and be responsible for Vietnam, as they understand the culture," he said.

On hiring local people, he said that the company has hired five Singaporeans, adding: "We are building our (headquarters) here. We're always hiring locals! And we're starting a Nas University in Singapore to teach locals video making."

He also highlighted the impact of his company on Singapore, claiming that it has brought in $1 million to the local economy in four months and that another $2 million was expected from its international clients soon.

"That's more than some Hollywood films."