SINGAPORE - The electricity tariff for just over half of households in Singapore will rise by 8.6 per cent for the second quarter of this year, compared with the previous quarter, said SP group on Wednesday (March 31).

This increase is mainly due to the higher cost of fuel for producing electricity by the power generation companies, it added.

For the period between April 1 and June 30, the electricity tariff will increase from 20.76 cents per kilowatt hour (kwh) to 22.55 cents per kwh, excluding the goods and services tax (GST).

Including GST, the rate for the second quarter is 24.13 cents per kwh.

The average monthly electricity bill for families living in four-room Housing Board flats will increase by $5.62 before GST, said SP Group.

The electricity tariff is calculated from four components, including energy costs that reflect the cost of imported natural gas.

The national power grid operator reviews electricity tariffs every quarter, based on guidelines set by the Energy Market Authority (EMA).

The recent increase was in tandem with the significant rise in global oil prices, said EMA.

With the gradual resumption of global economic activity and tightening supply in the global oil market, fuel prices have been on an uptrend, it said.

However, the rate for the second quarter is still below the electricity tariff for the same period last year.

Fuel prices decreased in the first half of last year and dipped to an all-time low last April owing to the Covid-19 pandemic, said EMA.

The new tariff rate applies only to consumers who are buying electricity from SP Group at the regulated tariff. These consumers make up about 51 per cent of household accounts as at the end of February.

EMA seeks proposals for trial to import electricity from Malaysia

Meanwhile, gas tariffs for households will also increase. They will go up by 0.84 cents per kwh, said City Gas.

This is due to an increase in fuel costs compared with the previous quarter, said City Gas.

The revised gas tariffs have been approved by EMA, which also regulates the gas industry. 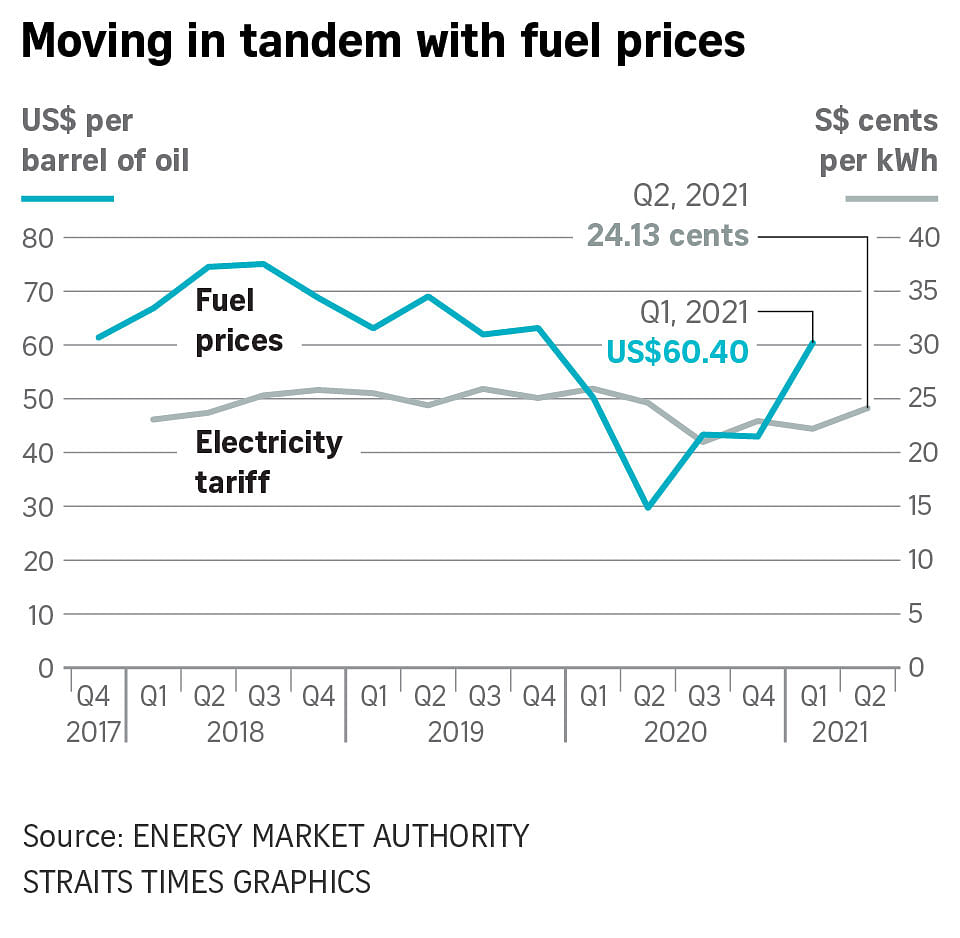