SINGAPORE - The fight against deliberate online falsehoods in Singapore is under way at Parliament House, with academics, legal experts and religious groups slated to speak on Wednesday (March 14) at the first public hearing on the issue.

At the opening of the hearing, chairman of the committee looking into the issue, Deputy Speaker Charles Chong, said: "Deliberate online falsehoods are a serious global problem, which many countries, including Singapore, have to grapple with. It is a complex problem, affecting us in many different ways."

The full-day session will first see academics Carol Soon and Shawn Goh of the Institute of Policy Studies, who have studied the impact of new media, as well as their colleague Mathew Matthews - known for his research on societal cohesion in Singapore - give their views on the problem of online fabrications.

Representatives for the Roman Catholic Archdiocese, National Council of Churches of Singapore and the Singapore Buddhist Federation are scheduled to weigh in with their community's views as well.

These speakers will appear before the 10-member Select Committee, which was set up in January to look into how Singapore can tackle deliberate online falsehoods.

The high-level parliamentary committee will speak to a diverse range of individuals and organisations from Singapore and abroad to help it decide on its recommendations, which will be submitted to Parliament.

This will take place over eight days this week and the next two weeks. As the hearings go on, the committee will decide whether all the dates are needed.

It received a record 164 written submissions, toppling the previous high of 99 submissions to the 1988 Select Committee on the Parliamentary Elections (Amendment) Bill and reflecting the interest and anxiety sparked by the scourge of disinformation. These included perspectives from religious groups, traditional and alternative media, technology companies and academics. 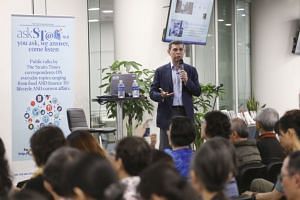 A total of 79 individuals and organisations have been invited to speak - outstripping past Select Committee hearings. Said Mr Chong: "We may revise the witness list as the hearings progress."

He said the current committee’s decisions on the process so far have been unanimous and consensual. "This reflects our common intention to engage widely on our terms of reference."
The committee said in a statement on Tuesday: "This is an indication of the importance of these issues at stake, and the (committee's) commitment to consult widely."
The hearings will cover themes such as the impact of deliberate online falsehoods on different parties here, how technology has worsened the problem, and the merits of different options, such as legislation.
Members of the public can sit in on these hearings, which are held at the Parliament House's new Public Hearing Room.
Fake news has plagued countries around the world, and hearings on Thursday and Friday will include perspectives from foreign bodies such as the European Values Think-Tank and the Ukraine Crisis Media Centre, some of them speaking via video-conference.

Mr Chong has said that the committee hopes to gather a broad range of views while his fellow commitee member, Home Affairs and Law Minister K. Shanmugam, hopes the process will allow members of the public to better understand the issues that Singapore and the rest of the world face when it comes to online falsehoods.