Singaporeans will need both knowledge and skills in order to thrive.

And this thinking underpins the fundamental changes in the education landscape in recent years - the upskilling of adults, school admissions based on aptitude and even the easing of emphasis on exams.

Saying that he was connecting the dots, Mr Ong spelt out how the SkillsFuture movement - launched in 2015 - spanned schools, higher education and the adult learning sector and was transforming preparations for the future.

"The SkillsFuture movement is not just about promoting vocational or technical work," he said at the triennial Singapore International Technical and Vocational Education and Training Conference yesterday. It was, instead, to tell Singaporeans that they have to go beyond academic qualifications and add skills to their repertoire.

That is because the lines between cognition and skills have been blurred, he said. Even academics now need skills to deliver research impact and craftsmen must internalise the science behind their work.

"It is not a traditional two-track system, with an academic path and a vocational path, but a multi-path system," said Mr Ong.

This change in mindset has meant that institutes of higher learning have become lifelong resources, educating the young, while helping adults upgrade their skills.

As of now, some 370,000 of the 2.6 million eligible Singaporeans have used their SkillsFuture credits to attend training courses. 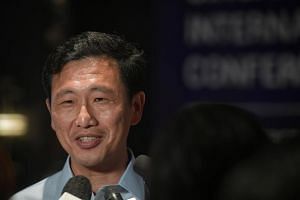 Tuition centres should not prey on parents' anxieties over removal of exams: Ong Ye Kung

From 2015 to last year, the total training hours for adult learners increased by 55 per cent from 26.5 million to 41 million.

The training participation rate for the resident labour force increased from 35 per cent to 48 per cent in the same time period.

"At the core of the SkillsFuture movement is passion," said Mr Ong. "A strong personal desire to do something really well, a motivation powerful enough to drive someone to learn and hone a craft for life."

This passion must be cultivated from a young age, he said. That is why a phased reduction in examinations at school has started so that there can be more time for learning.

"Our education system needs to focus on fundamentals, such as values, literacy and numeracy... and enact lessons in a way that spurs curiosity and wonder in our young, and makes their eyes light up," said Mr Ong. "It is therefore schools that lay the foundation for SkillsFuture and lifelong learning."

To prioritise those who are passionate about a subject, polytechnics introduced the Early Admissions Exercise (EAE) in 2016 to allow students to gain conditional admission to a course based on their aptitude and talent even before their qualifying final exams.

The 2019 admission year saw a record number of 13,900 EAE applicants, which is 13 per cent higher than the number last year.

The expected final enrolment through EAE next year should be about 4,600, or 20 per cent of total admissions, up from about 15 per cent now.

And once in poly, practically all students go through industry internships, while 70 per cent of those in university do so, as education has become more experiential.

"Collectively, all the changes that have been taking place are transforming the way we prepare Singaporeans for the future," he said.

Correction note: An earlier version of the article stated that there were 13,900 EAE applications for the 2019 admission year. It should be 13,900 applicants.