More pupils have been given offers from their desired secondary schools through the expanded Direct School Admission (DSA) scheme, which recognises talent beyond doing well in examinations.

This year, 3,000 pupils were successful in the DSA exercise, up from 2,500 last year, after a change that saw secondary schools being able to take in more students via the scheme and refining their selection practices to better recognise their potential.

The Ministry of Education (MOE) said that more than 90 per cent of secondary schools, or over 120 of them, offer the DSA.

The MOE said schools have come up with methods to identify the talents and potential of pupils, rather than just looking at portfolios and achievements in competitions. It encourages schools to invite all applicants down for trials at least once to have a gauge of their potential and general abilities.

From next year, pupils can apply for DSA through a centralised portal instead of applying to individual schools. Application will also be free, to encourage more pupils from different backgrounds to apply.

The changes come amid growing concern that children from more affluent families have the resources to be groomed to enter top schools via DSA, through sports coaching, music classes or interview preparation.

The scheme has also been criticised for becoming a route for academically bright pupils to reserve places in the popular Integrated Programme (IP) schools - whose students bypass the O levels - before sitting the Primary School Leaving Examination.

In this year's DSA exercise, IP schools accounted for 30 per cent of 3,800 confirmed offers, down from 40 per cent of 3,200 last year. A pupil can receive more than one offer. About one-third of students were admitted on the basis of academic talent last year, while the rest were through non-academic areas.

Speaking to reporters on the sidelines of a conference yesterday, Second Minister for Education Indranee Rajah said the online portal will benefit disadvantaged families by simplifying the process. She acknowledged that parents with more resources are more aware of the DSA. 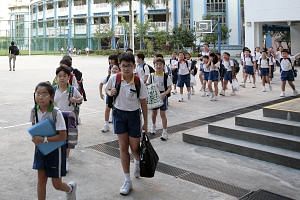 New moves to spur students to develop their abilities

Uni admissions: Poly grads' O-level grades to be dropped from 2020

"Those who come from disadvantaged backgrounds, generally speaking, may not be as well informed about some of the choices and opportunities available," she said. "So what we're really trying to do is close the gap, and to make sure that those less well resourced and less advantaged still have the opportunity to apply, and make it an available platform."

Some schools, like St Joseph's Institution, have scrapped the academic component of the DSA, on top of removing the General Ability Test, so that it focuses on other talents.

A spokesman for Raffles Institution (RI) said that it is looking at offering character and leadership as a new DSA category next year .

"RI offers talented students the opportunity to join the school regardless of their background," she said, adding that its DSA students come in via a range of areas, from academic subjects to music to sports.

Education observers said the changes may encourage more pupils, especially those from less affluent backgrounds, to try for DSA places. National University of Singapore economics lecturer Kelvin Seah said: "The hurdle is now lower for these pupils since the focus will be on demonstrating their talents and strengths through selection-based exercises such as creative tasks and scenario-based experiments, rather than how well they perform on general ability tests."

He said the challenge is to let parents from lower-income backgrounds know about the benefits of taking part in the DSA as opposed to going through regular school posting. "The onus rests on the shoulders of primary school teachers and principals to get the word out, and help parents identify potential in their children and make well-informed school choices."