SINGAPORE - Streaming as most Singaporeans know it will soon be abolished but from 2024, students will still be posted to secondary schools based on their Primary School Leaving Examination (PSLE) score across three bands.

In response to queries, the Ministry of Education (MOE) said the PSLE scores "will continue to serve as a good initial gauge of the pace of learning that our students are most suited for at the beginning of Secondary 1".

Education Minister Ong Ye Kung announced on Tuesday (March 5) that the Express, Normal (Academic) and Normal (Technical) streams will be phased out by 2024 and be replaced with full subject-based banding, where students take a combination of subjects at varying levels of difficulty.

MOE in 2016 also announced that the PSLE scoring system will get a revamp from 2021.

Pupils will be graded on each of their four subjects using wider scoring bands, known as Achievement Level (AL), from AL1 to AL8, with AL1 being the best grade and AL8 the lowest.

The sum of a pupil's four subject scores will make up his or her final score, which will be known as the PSLE Score, with 4 being the best score.

Those whose scores fall in between will be eligible for a mix of G1 to G3 subjects. 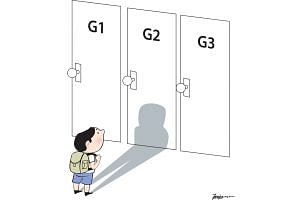 Now up to schools to change as MOE scraps streaming

End of streaming: Why full roll-out of move only in 2024

Students who do well in certain PSLE subjects can take them at a higher level from the start of Secondary 1, said an MOE spokesman - this is no different from what is already being done as part of subject-based banding.

For example, a pupil with a PSLE score of AL23 who did very well for English would take mostly G2 subjects and be offered English at G3 level in Secondary 1.

The MOE stressed that how a student fares at the PSLE will not constrain the choice of subjects and their levels of difficulty.

"Unlike the current approach where the course that a student is posted to in Sec 1 determines the bulk of his subject offerings throughout his secondary education, full subject-based banding will allow students to progressively take subjects at more demanding levels over the course of their secondary school years, as they discover their strengths and interests, and take on a combination of subjects across different levels over time," it said.

The MOE also said that Integrated Programme (IP) schools, which allow better-performing students to skip the O-levels and go straight to their A-levels or International Baccalaureate, will retain the autonomy to customise their curriculum to fit their students' needs.

Subject-based banding will largely not be implemented in these schools, as their curriculum is designed differently, said a spokesman, and they do not offer the national secondary curriculum leading to the N or O levels.

However these schools have the flexibility to offer subjects at less demanding levels if students can benefit from them, said MOE.