Salary structure is totally transparent, with no hidden components or perks, he points out

All the bonuses paid to an entry-level minister form part of his $1.1 million normal annual salary, Deputy Prime Minister Teo Chee Hean said yesterday, refuting online falsehoods that the bonuses ministers receive are in addition to that amount.

Mr Teo set out in detail the components that make up a minister's pay package, a move that comes about three weeks after Prime Minister Lee Hsien Loong issued a written response to a Workers' Party (WP) query on ministerial bonuses.

"The salary structure is totally transparent. There are no hidden salary components or perks," said Mr Teo.

He was replying to Mr Alex Yam (Marsiling-Yew Tee GRC), whose question follows that of WP's Non-Constituency MP Leon Perera, who asked last month about the bonus paid to Cabinet ministers. Mr Perera wanted to know the average total of bonus months, and the highest and lowest total of bonus months paid to a minister in the last five years.

Replying, PM Lee said political office-holders of all grades received an average annual performance bonus of about four months' pay in the last five years, with the sum for each individual ranging from three to six months of their pay each year.

Some online reports used the data to spread falsehoods that the Prime Minister is paid $2.2 million a year as a base salary that does not include bonuses, and that his total pay is $4.5 million. These reports also said the Government was not transparent about ministerial salaries.

Yesterday, Mr Teo said this was not true, and that all components of a political office-holder's annual pay are set out clearly in the 2012 White Paper on "Salaries for a Capable and Committed Government", which was submitted by an independent committee after extensive consultation with MPs and Singaporeans. A minister's salary comprises fixed pay plus variable pay, which includes performance and national bonuses. They add up to form the normal annual salary of $1.1 million for an entry-level minister.

Mr Teo noted that the WP in 2012 endorsed the three principles on ministerial pay set out in the White Paper. The WP also proposed a ministerial pay formula during the 2012 debate on the issue. It would have resulted in a similar total annual salary for an entry-level minister as that set out by the independent committee. 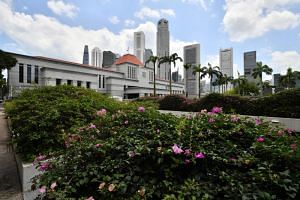 Salary formula proposed by WP in 2012 would have given ministers the same pay, says DPM Teo

Mr Singh said a parliamentary committee, tasked to look into the issue of deliberate online falsehoods, had concluded that it is "more propitious to give all the information in an easy-to-understand manner for people, thus reducing the prospect of misinformation online".

Mr Perera, who wanted a written answer on ministerial pay, said he asked for total bonus months, and not just performance bonus. "Would that not have been an opportunity to... disclose and publish the national bonus level in addition to a performance bonus level?"

Mr Teo replied that the data Mr Perera wanted was given, but it was then "misinterpreted and became a widespread basis for false information".

And so, he said, he would clarify the issue, adding that he was delighted Mr Singh and the WP "are all for transparency and debunking falsehoods... I hope the WP will help us to clarify that position by putting it on its website also".

In wrapping up, Mr Teo said ministerial pay is a difficult subject to talk about. "It is an emotional one. There are misconceptions sometimes deliberately propagated. It is easily politicised."