Even knowledgeable and well-meaning people with a deep interest in politics are susceptible to misconceptions about ministerial salaries, Deputy Prime Minister Teo Chee Hean said in Parlia-ment yesterday.

He cited how the chairman of resort developer Banyan Tree, Mr Ho Kwon Ping, had said in an interview with Channel NewsAsia (CNA) published on Sunday that he was paid less than ministers.

But the interviewer pointed out to Mr Ho that, according to Banyan Tree Holdings' 2017 annual report, his salary, including benefits and a bonus, was more than $2.5 million.

Mr Teo told the House that this sum is "significantly higher than that of ministers and certainly not lower than ministers' salaries".

He added: "Ministers, for example, are responsible for tourism development or air transport. It is just one of their many responsibilities which contribute to the growth of the tourism industry in our region, which Mr Ho's company operates in."

Mr Teo drew on the case of Mr Ho to make the larger point that the subject of ministerial salaries is a difficult one to talk about.

"It is an emotional one. There are misconceptions sometimes deliberately propagated. It is easily politicised," he said. "Even knowledgeable, well-meaning people who have a deep interest in politics can be susceptible to this." 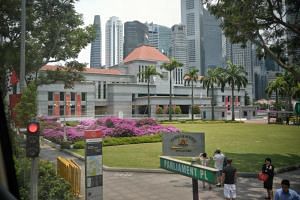 Salary formula proposed by WP in 2012 would have given ministers the same pay, says DPM Teo

ESM Goh: Ministers not paid enough; harder to attract people to government in the future

He noted that Mr Ho suggested during the interview that an independent commission should be formed to decide the quantum of ministers' salaries, while Mr Louis Ng (Nee Soon GRC) said in a separate interview with CNA last month that there should be "a stronger component of public consultation" in the salary debate.

Mr Teo pointed out that an independent committee was, in fact, formed in 2012 to study how best to calculate ministerial salaries, and it held extensive consultations with the people of Singapore.

"Minister salaries have been studied and recommended by an independent committee. They are fair-minded people who have the interest of Singapore and Singaporeans at heart," he said.

"They have recommended a framework and a quantum that reflects all these things that we talked about - sacrifice, commitment to service, working for the good of our fellow Singaporeans."

He underlined the importance of Singapore having "a fair, open, honest, transparent framework in place so that we can continue to have able, committed and passionate people with integrity come to serve as our political leaders".

Mr Teo, who turns 64 this year, and has been in politics for 25 years, said his most crucial task today is to help Prime Minister Lee Hsien Loong to prepare "not just the fourth generation leadership, but also to make sure that we are able to have a fifth generation of leaders coming in having the time to learn, to be tested and to gain the trust and support of Singaporeans".

"These are people in their late 30s and 40s. Many would be at a threshold where they have a good chance of reaching the peak in their chosen careers and professions," he added.

He said his People's Action Party looks for people with integrity, capability and commitment and who are prepared for the sacrifices that politics entails, such as the loss of privacy and family time.