In his first speech as Deputy Prime Minister, Mr Heng Swee Keat yesterday underlined that the close and symbiotic relationship between the labour movement and the People's Action Party (PAP) will continue with his generation of leaders, and beyond.

He pledged that the party's fourth-generation leaders will work with the National Trades Union Congress (NTUC) to renew Singapore and create a brighter future for its citizens.

"Today is the first time I'm speaking to you as leader of the next generation of PAP leaders," he told an audience of 1,600 unionists, workers, employers and Cabinet ministers at this year's May Day Rally.

Making reference to a landmark seminar in 1969, at which founding prime minister Lee Kuan Yew underscored the necessity of trade unions, Mr Heng said: "I renew the pledge that Mr Lee made at your Modernisation Seminar 50 years ago, and that every prime minister has since renewed. I assure you, the close working relationship between the PAP and the NTUC, which underpins our unique and precious brand of tripartism, will continue into the 4G and beyond."

The 1969 seminar was a turning point for unions, setting them on a path of collaboration with employers and the Government, he noted.

Running cooperatives gave their leaders business experience, shifting their adversarial stance towards management to one based on cooperation and mutual benefit.

This approach was critical in enabling workers to ride change, he said. It is as vital today as Singapore tackles challenges from technological advances, globalisation and a changing workforce profile. 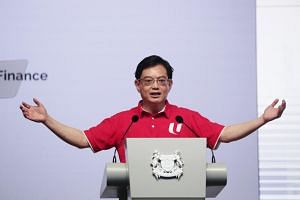 Reassurance, affirmation and a renewal of vows: Union leaders on DPM Heng's May Day Rally

Mr Heng, who is also Finance Minister, outlined three strategies for the labour movement: work to transform the economy, prepare workers for jobs of the future through lifelong learning, and ensure economic growth remains inclusive.

He noted that many people in advanced economies are frustrated as wages stagnate, political systems malfunction and living conditions remain stagnant. "We cannot guarantee the same will not happen here. But we can and must try to avoid a similar fate," he said. "And the key to that is tripartism and the continued vitality of our unions."

NTUC backs the PAP because the party has kept faith with the unions, while the party backs the labour movement because it has remained pro-worker, he added.

NTUC, he added, remains committed to the self-respect of every working man and woman, and believes that the purpose of economic development is to improve the lives of all in the workforce. "We strive for growth, in order to improve the lives of every Singaporean. The labour movement can be assured that the PAP will never abandon the working man and woman."

Yesterday also marked Mr Ng's first May Day Rally as labour chief. In an opening speech, he stressed that NTUC will work with the Government for the good of workers. "For what is economic growth - it is meaningless if it is not shared with our Singapore citizens and our Singapore workers," he said.

In a Facebook post, Prime Minister Lee Hsien Loong said: "Today, we must again act boldly to champion transformation efforts that benefit workers through better wages, better work prospects and better welfare. Our future will continue to revolve around our workers and their families."

Rounding up his speech, Mr Heng said: "My colleagues and I recognise the importance of what we are inheriting - this shared sense of responsibility that the PAP and the NTUC owe to Singaporeans and Singapore... My generation of leaders is ready to take up the baton."