SINGAPORE - The "close symbiotic relationship" between the labour movement and the ruling People's Action Party (PAP) will persist under the party's fourth-generation leaders, said Mr Heng Swee Keat on Wednesday (May 1) in his maiden speech as Deputy Prime Minister.

Speaking to about 1,600 unionists in a May Day Rally speech that focused on renewal and transformation, Mr Heng, who is also Finance Minister, pledged to work with the National Trades Union Congress (NTUC) to take Singaporean workers forward.

He said the partnership between the party and the NTUC goes back to principles established by founding Prime Minister Lee Kuan Yew, who had in a 1969 speech at the NTUC Modernisation Seminar emphasised the importance of trade unions for Singapore's development.

"Today is the first time I'm speaking to you as leader of the next generation of PAP leaders. I renew the pledge that Mr Lee made at your Modernisation Seminar 50 years ago, and that every Prime Minister has since renewed," he added.

"I assure you, the close working relationship between the PAP and the NTUC, which underpins our unique and precious brand of tripartism, will continue into the 4G and beyond."

Mr Heng said that the NTUC backs the PAP because the party has kept faith with the unions, while the party backs the labour movement because it has remained pro-worker.

He added: "The labour movement can be assured that the PAP will never abandon the working man and woman." 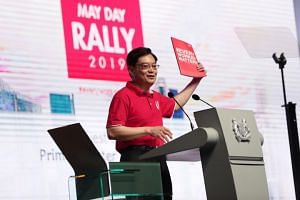 All of those in the PAP's fourth-generation leadership team - including Trade and Industry Minister Chan Chun Sing, current labour chief Ng Chee Meng, and Education Minister Ong Ye Kung - have been involved in the labour movement in one way or another.

The labour movement has been the PAP's most important partner since independence, and Singapore might not have weathered its earliest crises or industrialised so rapidly without this relationship, Mr Heng said.

Now, the labour movement must modernise, just as it did in 1969 after the landmark Modernisation Seminar, said Mr Heng, who quoted the late Mr Lee at length.

Mr Lee had said: "To survive as a nation and distinct community we have to be a proud and rugged people, or we fail. You can neither be proud nor rugged if you have not got self-respect."

"Self-respect is what our trade unions have and will give to our workers, that protection for a man's right to his own dignity, his dignity as a human being, as a citizen."

The NTUC has given every working man and woman self-respect, Mr Heng said. He paid tribute to the legacy of previous labour MPs and union leaders, who contributed to nation-building.

"My colleagues and I recognise the importance of what we are inheriting - this shared sense of responsibility that the PAP and the NTUC owe to Singaporeans and Singapore," he said.

"My generation of leaders is ready to take up the baton and carry forth the mission of renewing Singapore, to create a brighter future for Singaporeans."