Photos of the vandalised DBS branch in Mong Kok were posted late Thursday morning (Nov 14) on a Facebook group called the Concerned Citizens Band Together for a better Singapore. The post was shared more than 850 times in four hours.

A DBS spokesman told The Straits Times that the graffiti was cleaned off as soon as it was discovered on Thursday morning.

Some Hong Kongers have been upset by comments PM Lee made on the Hong Kong protests at the Forbes Global CEO Conference at the Shangri-La Hotel in Singapore in October.

During a dialogue at the event, Forbes Media chairman and editor-in-chief Steve Forbes asked PM Lee about the implications of the Hong Kong protests for Singapore.

Among other things, PM Lee said: "We thrive best in Singapore when the region is stable, when other countries are prospering and we can do business with them."

He said that he does not see any easy way forward for Hong Kong as the demonstrators' demands "are not demands which are meant to be a programme to solve Hong Kong's problems" but "demands intended to humiliate and bring down the government".

On Wednesday, a fire broke out in a unit next to a DBS branch in Hong Kong. Videos of the fire were widely shared online. DBS said the staff at the branch were safe and the premises were not damaged.

The bank did not give the locations of the branch. DBS has 34 branches in Hong Kong. 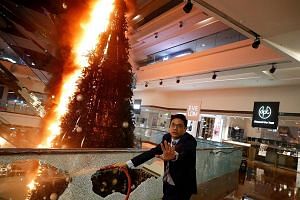 Glass panels at the entrance of the shopping centre’s lobby, as well as balustrades on various floors were smashed, while a Christmas tree in the lobby was set on fire.

No injuries were reported in the incident, and the mall remained closed on Wednesday.

Protesters on Tuesday had overrun City University, which is adjacent to Festival Walk mall. Students in hard hats and gas masks spent much of Tuesday barricading the university campus, making homemade shields and stockpiling bricks and petrol bombs on bridges, Reuters reported.

The Hong Kong protests were sparked by a now-withdrawn Bill that would have allowed the extradition of criminal suspects to the mainland. The protests have since widened into calls for greater democracy and investigations into police actions in quelling the protests.