SINGAPORE - A new crowdsourcing function will be added to the Government's OneService mobile app by this month, Minister for Culture, Community and Youth Grace Fu announced in Parliament on Monday (April 11).

For a start, people can use it to report abandoned trolleys, so that supermarket chains can locate and retrieve them more efficiently. If the initiative works well, the crowdsourcing arrangements will be expanded to cover other municipal issues, Ms Fu said.

This is not the only mobile app out available for members of the public to report matters to the appropriate government agency. Here are some free apps you may find useful.

A mobile guide to healthcare facilities including clinics, hospitals and nursing homes. There is a feedback section for public health safety issues as well as complaints against a healthcare establishment or professional. Using this app, you can check the weather, air quality (Pollutants Standards Index readings), location of dengue clusters, and even the times of tides in Singapore. The "Report to NEA" function allows users to report on matters such as construction noise, littering, public cleanliness and food hygiene.

myMaritime @ SG by Maritime and Port Authority of Singapore

Get access to shipping circulars, maritime security notices and vessel arrival/departure schedules. You can report unusual or illegal activities in port waters too. Launched in 2013, the app lets members of public take photos of, and report, fire safety violations or fire hazards to the Singapore Civil Defence Force (SCDF) instantly. It also has pictorial guides on emergency procedures such as cardiopulmonary resuscitation (CPR), and using a fire extinguisher. 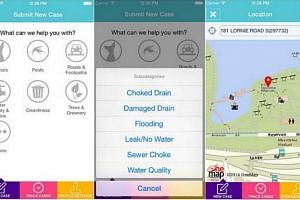 Download these mobile apps for government services on the go

There are modules for everything related to land transport in this app, including bus arrival times, traffic news and cameras, a MRT/LRT commuting guide, and information on cycling paths. You can use pictures to report on road defects via the "Snap & Send" function.

OneService by Ministry of National Development

Launched in January 2015, the app is part of the Government's ongoing efforts to provide a convenient channel for reporting municipal issues within Singapore. It provides for common categories of municipal issues such as littering and pest control, with more features to be offered under subsequent updates. View the crime statistics around your neighbourhood, read the latest crime news and locate the nearest police station using this app. Users can submit tip-offs for non-urgent cases via the "Crimestopper" function.

The app provides important information on what travellers can (and cannot) bring back into Singapore from their overseas trips. Users can contact the Agri-Food & Veterinary Authority on matters such as animal products, durable goods, drugs and medicine.

Catered to the needs of people who are constantly on the move, the app helps you locate Wireless @ SG hotspots across the island, as well as rate their connection levels.