SINGAPORE - Singapore's turn in the global spotlight helped propel tourist arrivals and spending to record highs for the third year in a row in 2018.

Total arrivals rose 6.2 per cent to 18.5 million, while tourism receipts went up by 1 per cent to $27.1 billion, according to preliminary estimates released by the Singapore Tourism Board (STB) on Wednesday (Feb 13).

Two events last year put the Republic on the global stage: the historic meeting between United States President Donald Trump and North Korean leader Kim Jong Un held in Singapore, and the release of Hollywood film Crazy Rich Asians, the first blockbuster in 25 years to feature an all-Asian cast, which was set in Singapore.

The STB said that organic search interest in Singapore increased by more than three times in the US during the movie's release, according to Google data, while there was a 110 per cent spike in searches on travel planning site Orbitz.

The Trump-Kim summit also boosted the Republic's image for its capability to host major international and business events, it said.

Still, while the number of tourist arrivals exceeded the STB's forecast, spending did not keep pace. This is because more visitors came to Singapore for a day trip or as a stop on a longer journey, resulting in shorter stays and less spending on souvenirs and gifts, the STB said.

Visitors spent less on shopping (-14 per cent), food and beverage (-4 per cent) and accommodation (-5 per cent) for the first three quarters of last year, compared with the same period in 2017. However, spending on sightseeing, entertainment and gaming rose 6 per cent, making it the second-biggest slice of the pie. 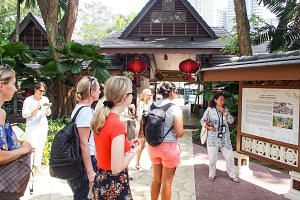 Singapore may have gained over $700m in exposure as host of Trump-Kim summit: Analyst Meltwater

'Where is Singapore?': Trump-Kim summit a public relations coup for tiny city state

A miscellaneous category that covers things like airfare expenditure on Singapore-based carriers, local transportation and business and medical tourism grew by 21 per cent over the same period to $5.76 billion, forming the largest share of spending. The STB attributed this to an increase in airfare revenues, driven by more visitors arriving on local full service carriers.

Visitor arrivals grew across almost all top 15 markets, with the biggest increases coming from the US (14 per cent), Britain (13 per cent), India (13 per cent) and Vietnam (11 per cent).

More flights between some of these countries and Singapore as well as greater demand for travel to and within the Asia-Pacific contributed to this growth, the STB said.

China remained Singapore's biggest source of visitors - and tourist spending - with 3.4 million visitors spending $3.16 billion here between January and September last year. Nearly half of that amount was spent on shopping, while the component spent on food and beverage by the Chinese was the smallest among the top 10 spending markets.

Indonesia was second and India third in tourist arrivals and spending.

Indian tourists posted the biggest increase - 18 per cent - in spending, excluding sightseeing, entertainment and gaming, and had a higher propensity to spend on accommodation.

On the other hand, visitors from South Korea, the Philippines and the US spent less last year.

The business events, hotel and cruise sectors all registered growth.

There was a 14 per cent increase in visitors who came for business travel, meetings, incentives, conventions and exhibitions for the first three quarters, and they spent $3.4 billion, a 10 per cent increase over 2017.

Gazetted hotel room revenue went up 7.4 per cent to $4 billion, while the cruise industry continued its double-digit year-on-year growth. Passenger traffic increased 35 per cent last year to 1.87 million, a record high for the fourth consecutive year, propelled by growth from the Indian market and new cruise offerings.

Coverage of the summit saw an estimated 2.36 billion views with 8,000 pieces of online content that mentioned Singapore in its headlines, while Google registered over two million hits on the phrase “where is Singapore” from the US alone, one day before the summit, he said.

STB’s assistant chief executive of its international group Chang Chee Pey added: “I think Crazy Rich Asians tapped this growing interest by Asian-Americans to rediscover their roots and come back to Asia.”

More flight options between the US and Singapore, such as United Airlines’ direct flights to San Francisco and Los Angeles, also helped to boost the growth in American visitors, he said. Addressing the slower rise in spending last year, Mr Tan said the amount is still a historic high.

“But overall there seems to be global industry trends where travellers are travelling more but spending less,” he said.

Currency fluctuations last year also had an impact on tourist spend, with eight of the Republic’s 14 top source markets seeing their currencies depreciate to their lowest levels against the Singapore dollar since 2015.

There has also been a trend of visitors spending less time here, with an increase in daytrippers, visitors pairing Singapore with other destinations and cruise passengers who make brief stopovers, he noted.

Mr Tan stressed however that tourism’s impact on Singapore is larger than just direct spending, as the industry’s efforts help to boost Singapore’s image in the minds of decision makers, entrepreneurs and politicians around the world.

The STB is also cautious of the country becoming “overly touristed”, Mr Tan said, adding that the agency “is not here to attract hordes and busloads of tourists to Singapore”.

“We are mindful that we need to find a balance so that tourism does not create disamenities for our locals and add strain to our infrastructure,” he said, adding that the STB is pursuing “quality tourism that is sustainable and targeted at the right audience”.

For 2019, the STB forecasts tourism receipts to grow by between 1 per cent and 3 per cent, and visitor arrivals to be in the range of 18.7 million to 19.2 million, an increase of 1 per cent to 4 per cent.